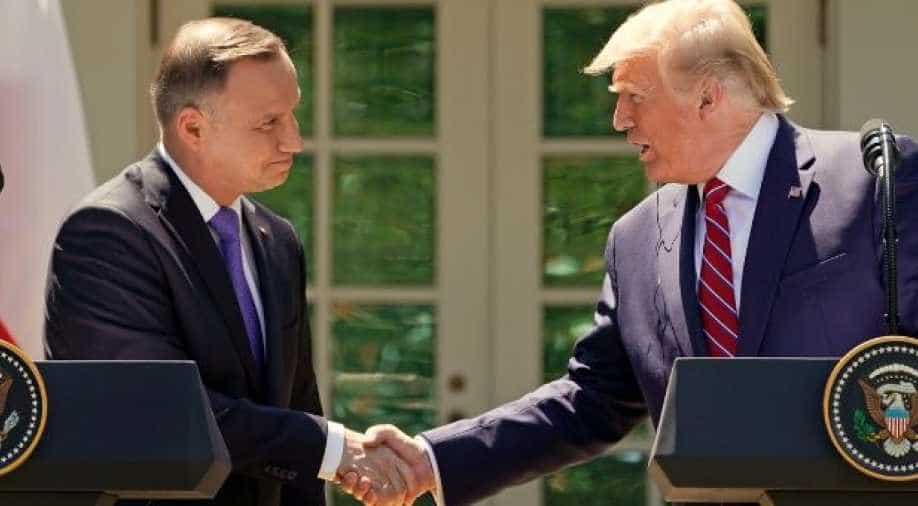 US President Donald Trump and Poland's President Andrzej Duda hold a joint news conference in the Rose Garden at the White House in Washington, US , June 12, 2019. Photograph:( Reuters )

Trump pledged to Polish President Andrzej Duda on Wednesday that he would deploy 1,000 US troops to Poland, a step sought by Warsaw to deter potential aggression from Russia.

Russian lawmakers said on Thursday that a new US military deployment to Poland announced by President Donald Trump would force Moscow to take retaliatory steps, with one saying it would make Poland a target in the event of a conflict.

Trump pledged to Polish President Andrzej Duda on Wednesday that he would deploy 1,000 US troops to Poland, a step sought by Warsaw to deter potential aggression from Russia.

Members of Russia's parliament were the first in Moscow to react to the initiative, which they said also envisaged deploying military drones.

"In the event of any conflict, God forbid, the territory of Poland would become a clear target for a retaliatory strike, if there was suddenly an attack on us," Vladimir Dzhabarov, deputy head of the upper house of parliament's international affairs committee, told the Interfax news agency.

Another lawmaker, ex-commander of Russia's special forces Vladimir Shamanov, who now runs the lower house of parliament's defence committee, said he was concerned about the US drones because of their potential to carry nuclear weapons.

"The world is gradually slipping towards a dangerous moment comparable to the Caribbean crisis," Shamanov said, using the Russian expression for the 1962 Cuban Missile Crisis - a standoff between the United States and the Soviet Union that brought the world to the brink of nuclear war.

"...We will be forced to take retaliatory measures and we have them in our armoury," Interfax cited him as saying.

The Russian parliament is not normally involved in the decision-making process on foreign affairs, except in situations where the Kremlin requests the upper house's formal approval for a military operation.

The Kremlin has yet to comment on the new US plans for Poland but President Vladimir Putin said in an interview, published earlier on Thursday, that relations between Moscow and Washington were getting worse and worse.

Trump announced the Polish deployment ahead of a G20 summit in Japan later this month, at which Trump and Putin might meet.