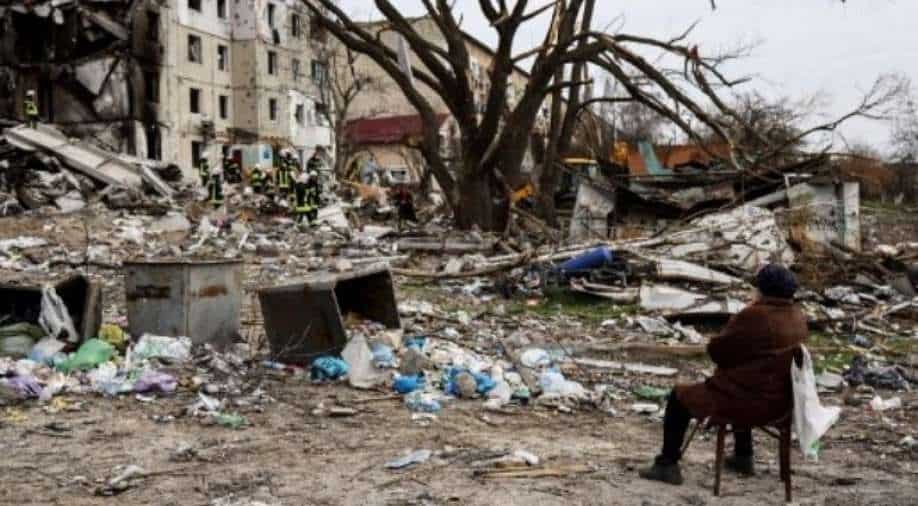 Antonina Kaletnyk waits for the body of her son in front of a collapsed building in the town of Borodianka, northwest of Kyiv. Photograph:( AFP )

Prime Minister Eduard Heger assured that Slovakia’s defence system is secure and annoucecd that he would visit Kyiv on Friday.

It’s been six weeks since the Russian invasion started, and Ukraine since then has been repeatedly asking Western countries for equipments to help battle the invasion.

The Ukrainian Foreign Minister, Dmytro Kuleba, made another request on Thursday at the NATO headquarters for planes, armoured vehicles, air defence systems and land-based anti-ship missiles.

The announcement was made a day after the United States declared that more than 30 countries are sending military help to Kyiv.

"I would like to confirm that #Slovakia has provided #Ukraine with an air-defence system S-300. #Ukrainian nation is #bravely defending its sovereign country and us too. It is our duty to help, not to stay put and be ignorant to the loss of human lives under #Russia’s aggression," he tweeted on Friday.

He asserted that Slovakia’s defence system is secure and added that he would visit Kyiv on Friday.

Also read | India is focusing on stablisation of economic ties with Russia: MEA

The prime minister further said that Slovakia would be receiving additional equipments from NATO allies to make further donations.

The donation made by the NATO member is the first one to Ukraine ever since the invasion started in February. On March, Germany and Netherlands sent three batteries of Patriot air defence system to Slovakia which will replace the S-300.

Moreover, Slovakia's defence minister Jaroslav Nad said they would be receiving the fourth patriot from the US next week.