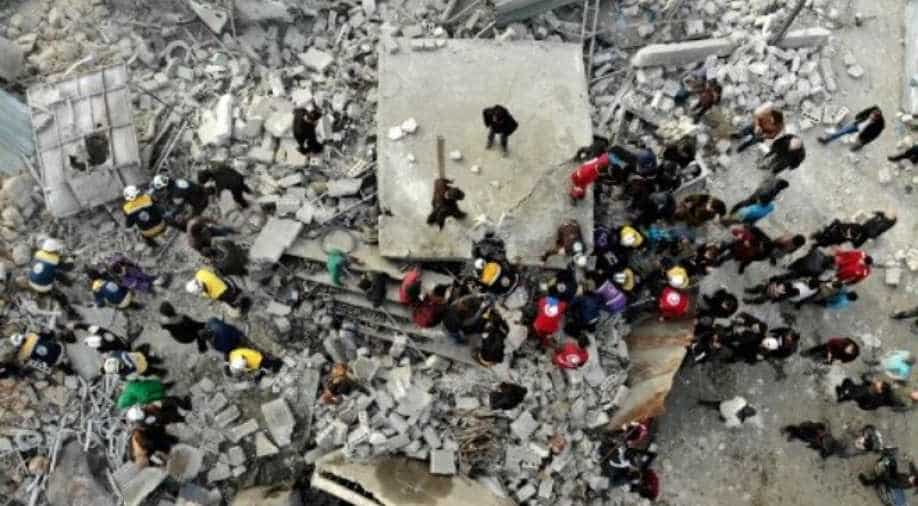 Fighting there since Wednesday has killed 28 civilians including eight children, according to the Observatory.

An airstrike Saturday by Syrian regime ally Russia killed five civilians, including four members of the same family, in an opposition bastion in the country's northwest, a monitor said.

The Syrian Observatory for Human Rights said three children were among those killed after midnight Friday in the village of Bala in the jihadist-run Idlib region.

"A man, his wife, and their two little girls were among those killed," said the head of the Britain-based monitoring group, Rami Abdel Rahman.

An AFP correspondent at a hospital in the area saw the bodies of two of the children wrapped up in thick winter blankets.

The strike created a massive crater of rubble near a two-storey home flanked by an empty outdoor swimming pool, the correspondent said.

A rescue worker found a stuffed toy cockerel inside the building.

The Observatory, which relies on sources inside Syria for its information, says it determines who carried out airstrikes according to flight patterns as well as aircraft and ammunition involved.

The Idlib region has witnessed an uptick in violence this week, as the Syrian government presses a deadly offensive despite a ceasefire arranged by its Russian ally and rebel-backer Turkey.

Home to three million people, the jihadist-run bastion is made up of a large part of the Idlib province, as well as slivers of the neighbouring Aleppo and Latakia provinces.

Fighting there since Wednesday has killed 28 civilians including eight children, according to the Observatory.

It also took the lives of 58 pro-regime fighters and 67 fighters most of them jihadists, it added.

Violence in recent weeks has prompted hundreds of thousands of civilians to flee their homes, exposing them to a harsh winter.

On Thursday, Russia denied launching any combat operations in the region since the start of a ceasefire it said went into effect on January 9. According to Turkey, the truce started on Sunday.

On Saturday, the Russian army deplored attacks led by HTS, describing them as "deliberate acts" designed to "undermine the ceasefire", according to Russian news agencies.

Turkey's President Recep Tayyip Erdogan has said he would discuss the latest attacks in northwestern Syria on Sunday with Russian counterpart Vladimir Putin.

Syria's war has killed more than 380,000 people and displaced more than half the country's population since starting in 2011 with the brutal repression of anti-government protests.