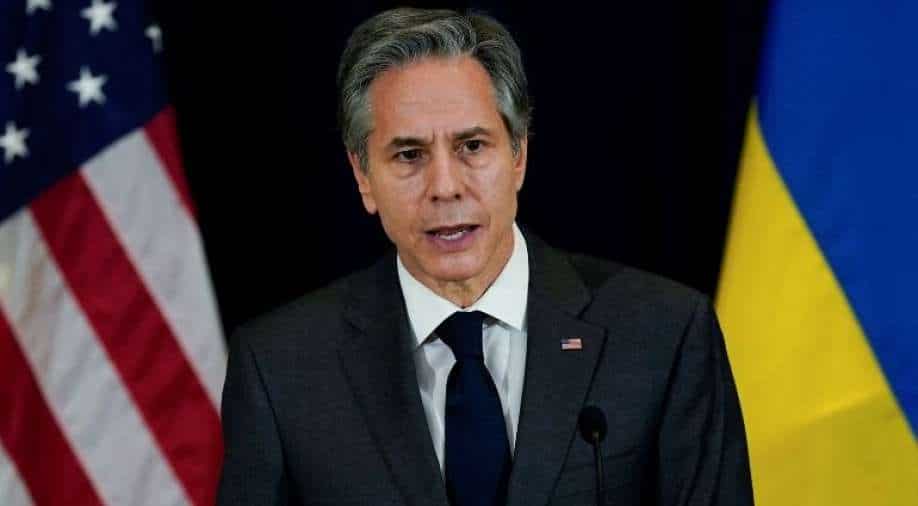 US Secretary of State Antony Blinken speaks during a news conference with Ukraine's Foreign Minister Dmytro Kuleba at the State Department in Washington Photograph:( Reuters )

Blinken decried that Moscow's 'violations of international humanitarian law mount by the hour', pointing to the many civilians killed and well over half a million who have fled the country in a matter of days.

US Secretary of State Antony Blinken questioned Tuesday whether Russia deserved to remain a member of the UN Human Rights Council following its invasion of Ukraine.

"One can reasonably ask whether a UN member state that tries to take over another UN member state, while committing horrific human rights abuses and causing massive humanitarian suffering, should be allowed to remain on this council," he asked in a video address to the UN's top human rights body in Geneva.

He warned, "if President Putin succeeds in his stated goal of toppling Ukraine's democratically-elected government, the human rights and humanitarian crises will only get worse".

"We must send a resolute and unified message that President (Vladimir) Putin should unconditionally stop this," he said.

Russian shelling pounded civilian targets in Ukraine’s second-largest city again Tuesday and a 40-mile convoy of tanks and other vehicles threatened the capital — tactics Ukraine’s embattled president said were designed to force him into concessions in Europe’s largest ground war in generations.

"As a result of an air strike... eight people were killed and six injured in Kharkiv," Ukraine's emergency service said, adding that two people had been recovered alive from debris by rescue workers.

With the Kremlin increasingly isolated by tough economic sanctions that have tanked the ruble currency, Russian troops attempted to advance on Ukraine’s two biggest cities.

In strategic Kharkiv, an eastern city with a population of about 1.5 million, videos posted online showed explosions hitting the region’s Soviet-era administrative building and residential areas.

With Western powers sending weapons to Ukraine and driving a global squeeze of Russia’s economy, President Vladimir Putin’s options diminished as he seeks to redraw the global map — and pull Ukraine’s western-leaning democracy back into Moscow’s orbit.