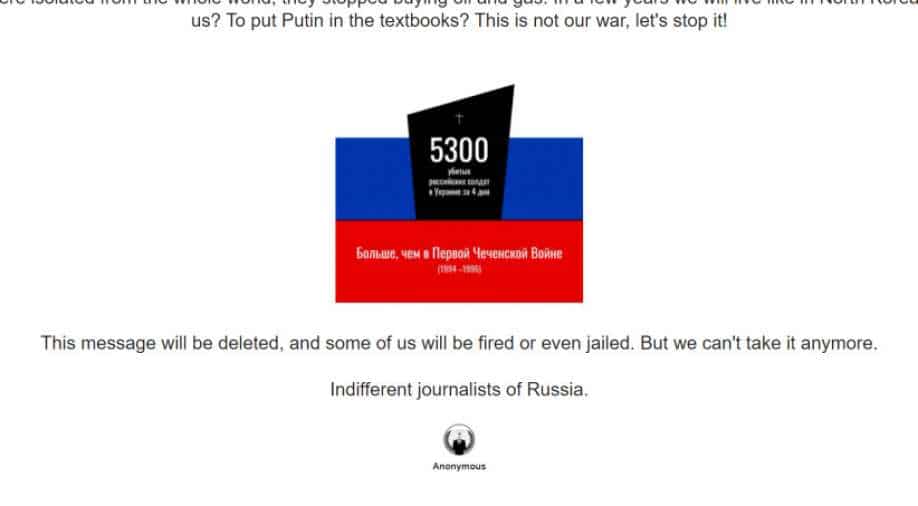 Screenshot of a message (in Russian) which replaced the TASS website on Monday Photograph:( Agencies )

The message featured the logo of the Anonymous hacker group

The website of the Russian news agency, TASS, was hacked on Monday with anti-Putin messages displayed on the homepage calling for war to be stopped.

According to reports, the Russian Kommersant and Izvestia news sites were also hacked as well. All three sites were down as of Monday afternoon.

The message featured the logo of the Anonymous hacker group.

"Dear citizens. We urge you to stop this madness, do not send your sons and husbands to certain death," read the message.

"Putin makes us lie and puts us in danger. We were isolated from the whole world, they stopped buying oil and gas. In a few years we will live like in North Korea. What is it for us? To put Putin in the textbooks? This is not our war, let's stop it! This message will be deleted, and some of us will be fired or even jailed. But we can't take it anymore."

The message was signed "Caring journalists of Russia."

The message also featured a graphic reading "5,300 Russian soldiers killed in Ukraine in four days. More than in the First Chechen War."

This is the second time in a week that Russian sites were targeted by the Anonymous group.

On Saturday, Russia's state-controlled international television outlet, RT, official websites of the Russian government, the Duma, the Kremlin, and the Ministry of Defence were all impacted by the alleged cyberattack.

Moreover, a few of the attacked websites also slowed down, while the others were taken offline.

The cyberattacks came days after Ukrainian Vice Prime Minister and Minister of Digital Transformation Mykhailo Fedorov announced the creation of an "IT army" to conduct cyberattacks against Russian targets.