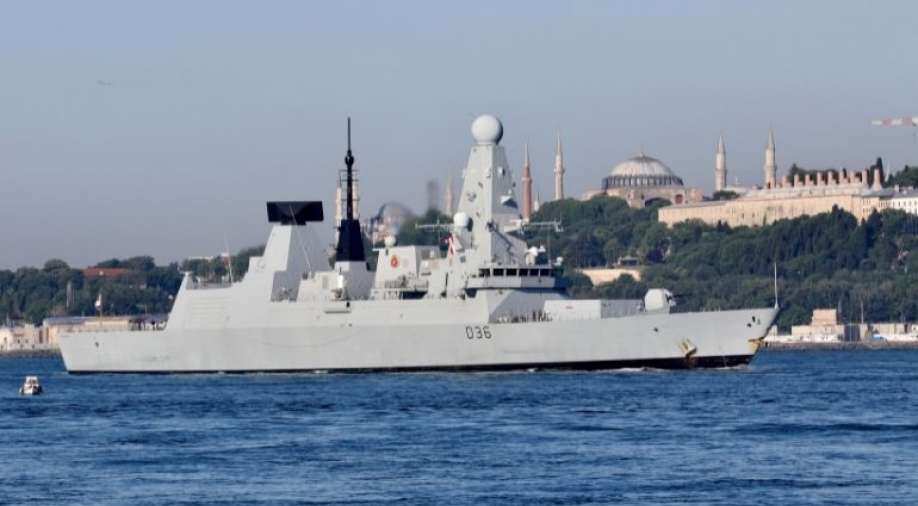 The incident in the Black Sea near Crimea marked the first time since the Cold War that Moscow has used live ammunition to deter a NATO warship, reflecting growing risks of military incidents amid soaring Russia-West tensions

A Russian warship fired warning shots and a warplane dropped bombs Wednesday to force a British destroyer from an area in the Black Sea near Crimea that Russia claims as its territorial waters.

The incident marked the first time since the Cold War that Moscow has used live ammunition to deter a NATO warship, reflecting growing risks of military incidents amid soaring Russia-West tensions.

The Russian defence ministry said the Russian warship fired warning shots after the British missile destroyer Defender had ignored a notice against intrusion in Russia's territorial waters. It said that a Russian Su-24 bomber also dropped four bombs ahead of the British ship to persuade it to change course.

The Russian defence ministry said it has summoned the UK military attache in Moscow to protest the British destroyer's manoeuvre.

Britain's Ministry of Defence said no Russian warning shots were fired at the Royal Navy's HMS Defender, which sailed into the Black Sea earlier this month, and it did not recognise assertions that bombs were put in its path.

No warning shots have been fired at HMS Defender.

"We believe the Russians were undertaking a gunnery exercise in the Black Sea and provided the maritime community with prior-warning of their activity," the defence ministry said in a statement on Twitter.

NATO members Turkey, Greece, Romania and Bulgaria all are on the Black Sea, but warships from the US, UK and other NATO allies also have made increasingly frequent visits in a show of support to Ukraine.

Ukrainian Foreign Minister Dmytro Kuleba said the incident showed that Russia's "aggressive and provocative policies" in the Black Sea and nearby Azov Sea constituted a "continuous threat to Ukraine and its allies". In a tweet, he called for NATO to cooperate with Ukraine in the Black Sea.

In April, Russia imposed restrictions on foreign navy ships' movements near Crimea until November in a move that drew strong complaints from Ukraine and the West.

Russia seized and annexed the Crimea peninsula from Ukraine in 2014 and considers areas around the peninsula's coast to be Russian waters. Western countries consider the peninsula part of Ukraine and reject Russia's claim to the seas around it.