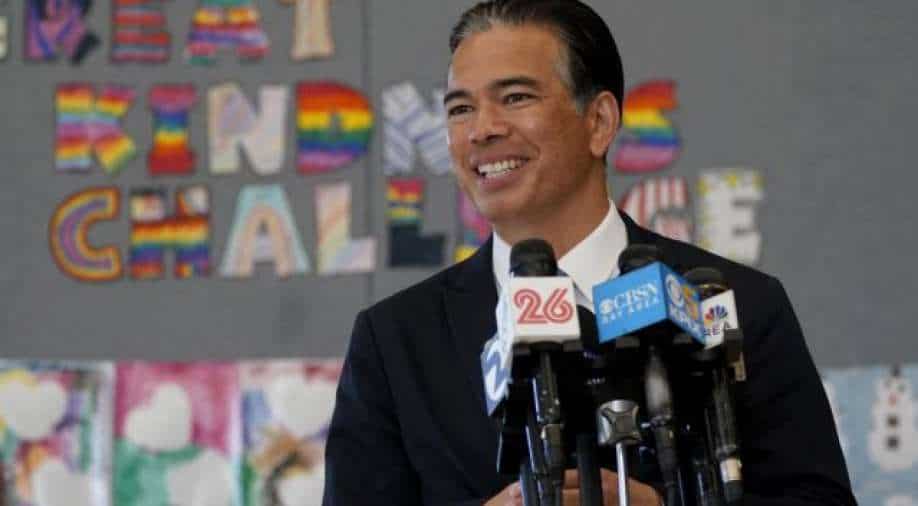 The announcement came slightly less than a week after Becerra’s narrow confirmation as health and human services secretary for President Joe Biden. It also came at a politically fraught time for Newsom, who has been under pressure to shore up his base in the face of a recall campaign and to take a hard line on recent racial violence against Asian Americans.

The announcement came slightly less than a week after Becerra’s narrow confirmation as health and human services secretary for President Joe Biden. It also came at a politically fraught time for Newsom, who has been under pressure to shore up his base in the face of a recall campaign and to take a hard line on recent racial violence against Asian Americans.

The son of civil rights activists, Bonta, 48, was born in the Philippines and will be the first Filipino American to hold the office. He grew up in California’s Central Valley, where his parents helped organize farmworkers before moving to the Sacramento area. Bonta, who called the appointment “an honor of a lifetime,” is a graduate of Yale University, where he earned a bachelor’s degree in history and his law degree.

A former San Francisco deputy city attorney, Bonta served briefly on the Alameda City Council before running for the state Assembly, where he has represented the East Bay since 2012. As a legislator, he carried bills to eliminate the use of cash bail — a measure that the state’s voters overturned in November — and to phase out California’s use of private prisons. He also was among numerous co-authors of an unsuccessful constitutional amendment to repeal the death penalty.

“Rob represents what makes California great — our desire to take on righteous fights and reverse systematic injustices,” Newsom said in a statement. “Most importantly, at this moment when so many communities are under attack for who they are and who they love, Rob has fought to strengthen hate crime laws and protect our communities from the forces of hate.”

Bonta will be the state’s second Asian American attorney general, after Vice President Kamala Harris, who is of Jamaican and Indian descent. Progressives and organized labor play a critical role in mobilizing Democratic voters in California, and no state’s population except Hawaii’s has a higher percentage of Asian Americans, who make up about 16%.

The nomination is subject to confirmation by the state’s Assembly and Senate within 90 days.

Becerra, who took office in the wake of Donald Trump’s 2016 presidential election, filed more than 100 lawsuits against actions taken by the Trump administration on matters ranging from immigration to auto emissions standards. With Biden, a fellow Democrat, now in the White House, allies had encouraged the governor to name an attorney general who might complement, rather than fight, presidential priorities.

Bonta was endorsed by Democrats seeking to overhaul the state’s criminal justice system, which in recent years has swung back from tough-on-crime policies. Bonta shares the governor’s opposition to the death penalty and supported a new law that will require him as attorney general to investigate fatal police shootings of unarmed civilians.

The attorney general’s office in California is viewed as a reliable springboard to higher office, and past occupants have included Harris and former Gov. Jerry Brown. Competition had intensified as it became clear that Becerra, a former congressman, might return to Washington.

The new state law giving the attorney general a pivotal role in police shootings also heightened interest in the appointment, as civil rights advocates pushed the governor to name someone who would aggressively investigate police misconduct, while law enforcement groups lobbied for a traditional law-and-order candidate.

Against that backdrop, the attorney general vacancy was less a political plum than an opportunity to disappoint factions. House Speaker Nancy Pelosi had urged Newsom to appoint Rep. Adam Schiff, who has long aspired to statewide office, and who, as chairman of the House Intelligence Committee, managed Trump’s first impeachment. Newsom also was urged by various groups to name an African-American, a woman, a member of the LGBTQ community, another Latino or an Asian-American or Pacific Islander.

Supporters of other candidates noted that Newsom had already made history with several appointments: In November, he appointed Martin Jenkins, who is African American and openly gay, to the California Supreme Court. In December, as Harris was about to be inaugurated, he named California’s secretary of state, Alex Padilla, to serve the remainder of her term in the U.S. Senate, the first Latino in California history to hold that office.

Later the same day, he appointed Shirley Weber, who represented San Diego in the state Assembly, as California’s first African-American secretary of state.

Bonta, who has never campaigned outside the Bay Area, will have to run statewide in two years for reelection, as will the governor’s appointees for Senate and secretary of state and the governor himself, if he is not recalled in special election expected later this year.

State ethics watchdogs last year also questioned Bonta’s use of a nonprofit to raise money for other nonprofits where his wife worked — an aggressive but legal maneuver that prompted an author of California’s Political Reform Act to recommend a change in the state law.

A group of lawmakers and local elected officials renewed their push for Newsom to appoint an Asian-American or Pacific Islander to the post following last week’s shooting in Atlanta. They said that amid a rise in anti-Asian violence and harassment, the state’s “top cop” should understand the nuances and concerns of diverse communities, many members of whom may not trust law enforcement officers.

California, they said, should be a model for addressing those concerns.

“We need leadership across our state and the nation to take action,” David Chiu, a member of the Assembly, said in a virtual news conference. “We need to stand up against these hate crimes.”