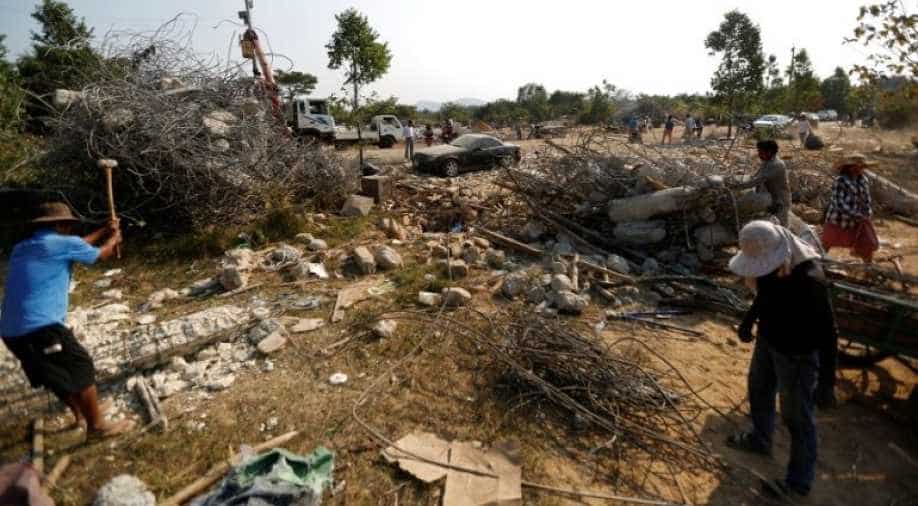 The heavy death toll has highlighted the dangers of the lightly regulated industry, with workers saying they live on-site to save money

Six children including at least two infants among 36 people killed when an unfinished building collapsed in Cambodia were living on the site with their families, a common practice in Cambodia's construction boom, survivors said on Monday.

The heavy death toll has highlighted the dangers of the lightly regulated industry, with workers saying they live on-site to save money.

The building, a multi-story guesthouse going up in the coastal town of Kep, crashed down on Friday as labourers and their families were relaxing after a hard day on the job, in which they laid the concrete for the building's seventh floor.

Authorities have yet to determine why it came down.

Scrap collectors were on Monday combing the rubble, cutting through iron fittings to collect metal to resell and looking for anything of value after authorities ended a search for survivors.

A black Mercedes Benz Kompressor belonging to the building's now-detained owner was left on the side of the road.

One entire family, including a 5-month-old baby and 4-year-old, died in the collapse, said Seth Pheara, a family friend.

The mother, Mae Ah Yai, came to work at the site with her husband when she was pregnant and the entire family lived in the unfinished building.

"She worked until she was eight months pregnant and then she stopped," Seth Pheara, who lives near the collapsed building, told Reuters.

On Friday afternoon, workers finished laying the seventh-floor concrete so the construction supervisor, known to workers as "Kun", decided to throw a party for workers and their families.

His wife, who ran a small grocery store on the ground floor, provided some beers.

“They all lived at the construction site, there was no other home, they all worked and slept there,” said Chey Phat, 32, who lost four members of his family and works at another construction site in the area.

Twenty minutes into the party, the building collapsed.

The supervisor, his wife, and their two children perished, as did Chay Phat's own relatives, including a 15-year-old and an 18-month-old.

"The baby was just starting to learn to run around and talk," Chey Phat said, speaking to Reuters by telephone from Svay Rieng province, near Vietnam, where some funerals took place.

Authorities have detained the owners of the building, identified as Ek Sarun and his wife, Chhiv Sothy, but Kep governor Ken Satha said on Monday he was unaware if they were charged with any crime.

"In principle, people are not allowed to live at construction sites," Ken Satha said. "But we don't have places for them to live. This is a private construction."

Asked whether authorities will ban workers from living at other construction sites, Satha replied: "We will take measures."

At least 23 people were injured in the building collapse.

Dem Yon, 34, counts himself lucky to have survived along with his wife.

He said he wanted to stop construction work as soon as he could afford to do so.

"I'll stop working on tall buildings, I'll only work on low ones," he vowed.