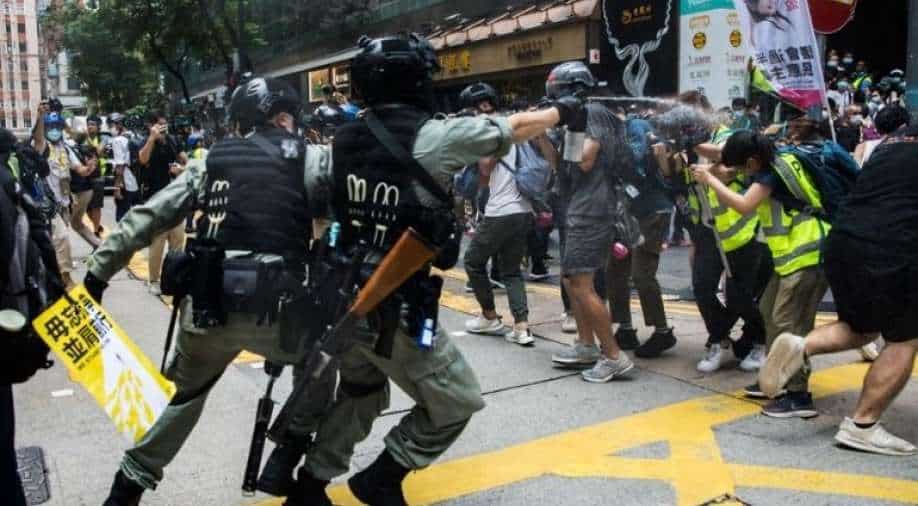 Riot police (L) deploy pepper spray toward journalists (R) as protesters gathered for a rally against a new national security law in Hong Kong on July 1, 2020, on the 23rd anniversary of the city's handover from Britain to China. A man found in possession Photograph:( AFP )

On Tuesday, the annual report by the Committee to Protect Journalists was released as the watchdog accused governments around the world of suppressing the media, and fuelling misinformation amid the ongoing pandemic

A US-based watchdog revealed that a record number of journalists were jailed in 2020.

On Tuesday, the annual report by the Committee to Protect Journalists was released as the watchdog accused governments around the world of suppressing the media, and fuelling misinformation amid the ongoing pandemic.

According to the report, 274 journalists were put behind bars in 2020 - the highest number since the organisation started conducting surveys in the 1990s.

Additionally, the report found that 26 journalists and media employees were killed in 2020. Mexico has become the world’s most dangerous place for journalists.

The annual report by the Committee to Protect Journalists found that 274 journalists were imprisoned in 2020 -- the highest number since the non-profit organisation began its survey in the 1990s.

"It's shocking and appalling," CPJ’s Executive Director Joel Simon said in a statement.

"This wave of repression is a form of censorship that is disrupting the flow of information and fueling the infodemic," Simon added.

Globally, China remained the worst offender for the second consecutive year, as per the survey. In the country, 47 journalists were imprisoned. Just last week, a Bloomberg employee was detained on suspicion of endangering national security.

Others on top of the list were Turkey, Egypt, Saudi Arabia, Belarus, Ethiopia. In the last two countries, protests and conflict has led to an increase in the number of detained journalists.

According to the report, no reporters in the US were in jail during the time of the release, but an “unprecedented” 110 were arrested or detained in 2020. According to the CPJ, the Trump administration can be partially blamed for the deteriorating state of global press freedom.

Donald Trump has refused to press foreign countries in matters of human rights, and has also gotten into a direct confrontations with media, and has referred to majority of US media houses as “fake news”.

Simon added that the Biden administration must work on improving the ratings globally.

"The incoming Biden administration must work as part of a global coalition to bring the number down," CPJ CEO Simon added.