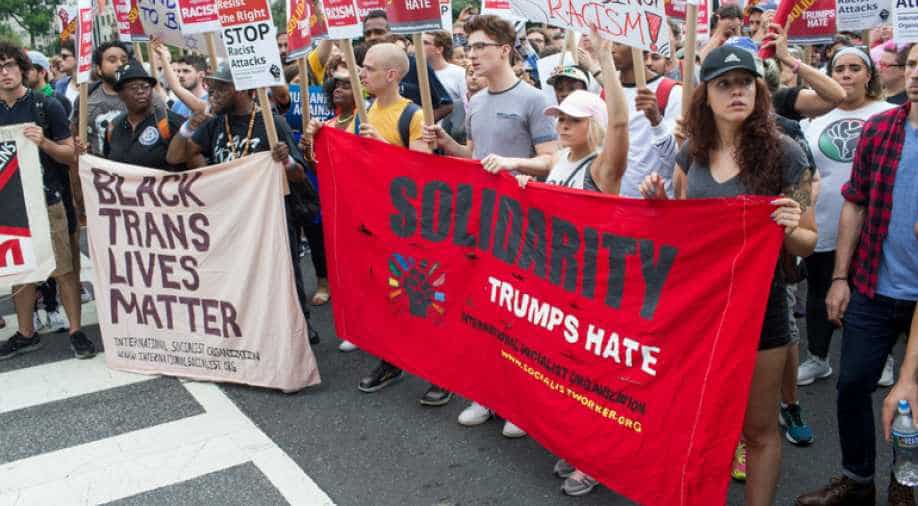 Counter protestors to a far-right rally march during the Unite the Right 2 Rally in Washington, DC. Photograph:( AFP )

It is high time the United States of America is pulled up for racial discrimination because prejudice, racial attacks, criminalisation of the black population has been a reality in the US for centuries.

Many African-Americans do not enjoy the right to life. Racism goes back to the roots of America. The first African slaves arrived on the shores of America in 1619. The division was clear - the blacks were slaves and the whites were slave owners.

Over 400 years have passed and 152 years since the African-Americans were given American citizenship. In July 1868, black Americans were finally declared citizens but not much has changed. Slavery has been abolished but racism remains codified in American society.

African-Americans are still treated as takers and over-policing has replaced the black codes and black inferiority is the modern and more acceptable version of slavery.

The sentiment has been unapologetically projected on the silver screen. In 1915, the movie "Birth of the Nation" celebrated white supremacy. It criminalised black Americans and upheld the sense of us vs them.

The prejudice haunted black soldiers when they returned from their World War-I postings. In 1919, black soldiers were attacked. There were riots in 34 American cities. White supremecists apparently wanted to show black soldiers "their place". In 1957, nine black students were harassed and spat on by then racism had become an accepted wrong.

The law mandated separate public spaces. Blacks and whites could not sit together in a classroom, let alone eat together at restaurants. When blacks broke these laws, they were brutalised by the police.

When they were lynched, the police turned the other way though African-Americans were granted equality on paper, the reality was very different. It was against this reality that activists like Martin Luther King jr raised their voice.

Martin Luther King Jr's speech shook the world but America refused to change. In 1965, an African-American was pulled over on suspicion of drunk driving. The cops roughed up Marquette Frye as unprecedented riots followed.

History repeated itself nearly three decades later. At least 50 people were killed in Los Angeles riots and some 10,000 others were arrested for rioting, looting and arson. The trigger was the acquittal was four police officers who were caught on camera beating a black construction worker - Rodney King.

The jury was predominantly white, however, the turn of century came with a fresh ray of hope as America got its first black president but outside the gates of the Obama's White House, the world was still unsafe for African-Americans.

In 2014, an officer shot an unarmed black teenager. Michael Brown's culprit was not indicted and there was widespread anger and protests and it channeled into the black lives matter movement.