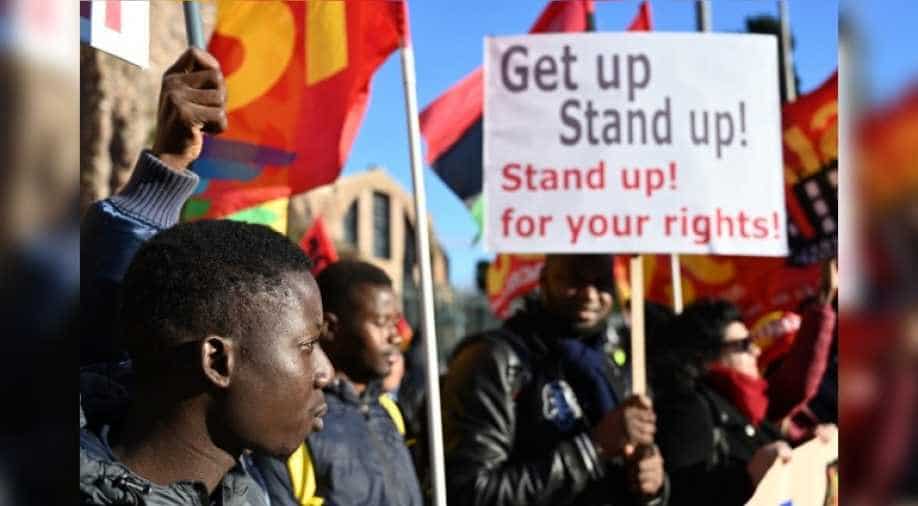 The protesters waved flags and donned yellow vests emblazoned with the slogan 'Get up! Stand Up! for your right' in a reference to the famous Bob Marley song.

The protesters waved flags and donned yellow vests emblazoned with the slogan "Get up! Stand Up! for your right" in a reference to the famous Bob Marley song.

The new law would "only increase the number of people without papers in Italy and force people underground", protester Kone Brahima, originally from Ivory Coast, told AFP.

Another, Tony Scardamaglia, from Palermo, said: "We are still building more walls, more barriers," adding that the anti-migrant and security degree adopted last month would just cause more "difficulties".

The decree, adopted by parliament on November 28, also limits residence permits in a country that has become the main gateway for migrants crossing the Mediterranean.

A populist coalition government made up of the far-right League and anti-establishment Five Star Movement took power in Italy in April 2018.

Interior Minister Matteo Salvini's anti-immigrant League has since surged in popularity, with opinion polls putting the party on 30 per cent, up from the 17 per cent it won in the election.

"First of all, we started two years ago criminalising those who save thousands of lives at sea" and ended up "closing ports to boats loaded with survivors", said Project Rights, a collective bringing together various human rights groups.

"Today with the Salvini decree, we have abolished humanitarian protection, creating an endless stream of people forced into hiding," it said in a statement.

The decree also ends two-year "humanitarian protection" residency permits a lower level of asylum status based on Italian rather than international law that was awarded to 25 per cent of asylum seekers last year.

Instead, residency permits will be awarded under stricter conditions such as a one-year "special protection" status or a six-month "natural disaster in the country of origin" status.

A new procedure to fast-track the expulsion of "dangerous" asylum seekers will also be implemented.

The Italian Refugee Council has said it is "seriously concerned" by the new law.

The United Nations refugee agency has also said it does "not provide adequate guarantees, especially for the vulnerable or those with particular needs such as victims of abuse or torture".

This year some 22,500 migrants landed on Italy's coasts, representing a drop of more than 80 per cent compared to 2017.