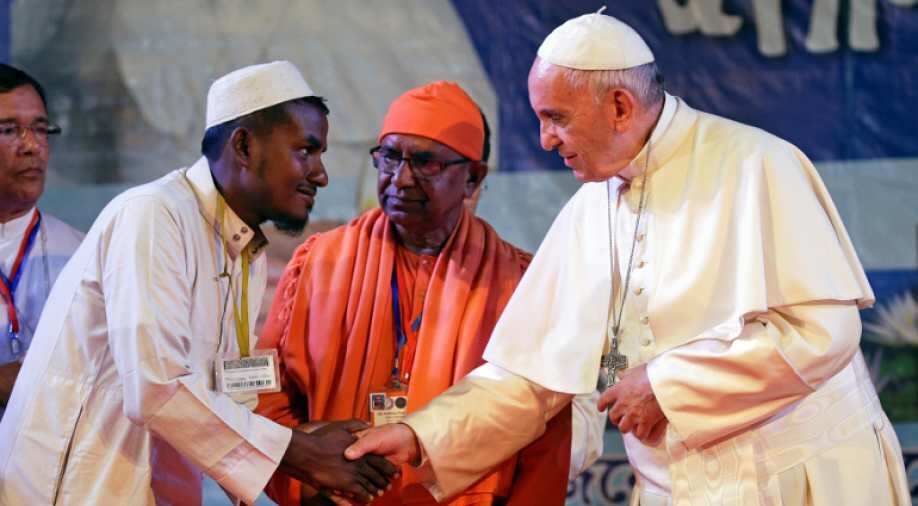 Pope Francis shakes hands with a Rohingya refugee during an inter-religious conference at St Mary?s Cathedral in Dhaka, Bangladesh on December 1. Photograph:( Reuters )

Pope Francis has said he wept hearing the plight first-hand of Rohingya refugees in Bangladesh, adding that this meeting was a condition set for his trip to Myanmar and Bangladesh.

The Rohingya meeting was a highly symbolic gesture of solidarity with the Muslim minority fleeing violence in Myanmar, and the pontiff told journalists on his plane flying back to Rome that the refugees cried as well.

"I knew that I was going to meet the Rohingyas but I did not know where and how, for me it was one of the conditions of the trip," he said.

The usually forthright pontiff walked a diplomatic tightrope during his four days in Myanmar -- the first papal visit to the country -- avoiding any direct reference to the Rohingya in public while appealing to Buddhist leaders to overcome "prejudice and hatred".

In Bangladesh he addressed the issue head-on, meeting a group of Rohingya refugees from the squalid camps in southern Bangladesh in an emotional encounter in Dhaka.

"What Bangladesh has done for them is enormous, it's an example of welcome," he said.

"I told myself 'I cannot leave without saying a word to them'".

The pope told the Rohingya: "In the name of all those who have persecuted you, who have harmed you, in the face of the world's indifference, I ask for your forgiveness."

The pope referred to the refugees as Rohingya, using the term for the first time on the tour in Bangladesh after the archbishop of Yangon advised him that doing so in Myanmar could inflame tensions and endanger Christians.

The word is politically sensitive in mainly Buddhist Myanmar because many there do not consider the Rohingya a distinct ethnic group, regarding them instead as interlopers from Bangladesh.

"If I had used the word during an official speech I would have slammed the door," he said, adding: "They already knew what I thought."

"For me the most important thing is that the message gets through," he added.

The pope said he was "very satisfied" with his meetings in Myanmar and hinted that he expressed his opinion far more freely in private conversations with the country's leaders than in his public appearances.

More than 620,000 Rohingya have crossed into Bangladesh since a militant attack on police posts in late August sparked a deadly crackdown by the Myanmar military.

They have given consistent accounts of mass rape, killings and villages deliberately burned to the ground by soldiers and Buddhist militia.

The two countries last month signed an agreement to begin repatriating refugees to Myanmar, but rights groups say they are concerned about plans to house them in camps away from their former homes -- many of which have been destroyed.

During his tour, the pope led well-attended open-air masses in Bangladesh and Myanmar, which both have small Christian populations.