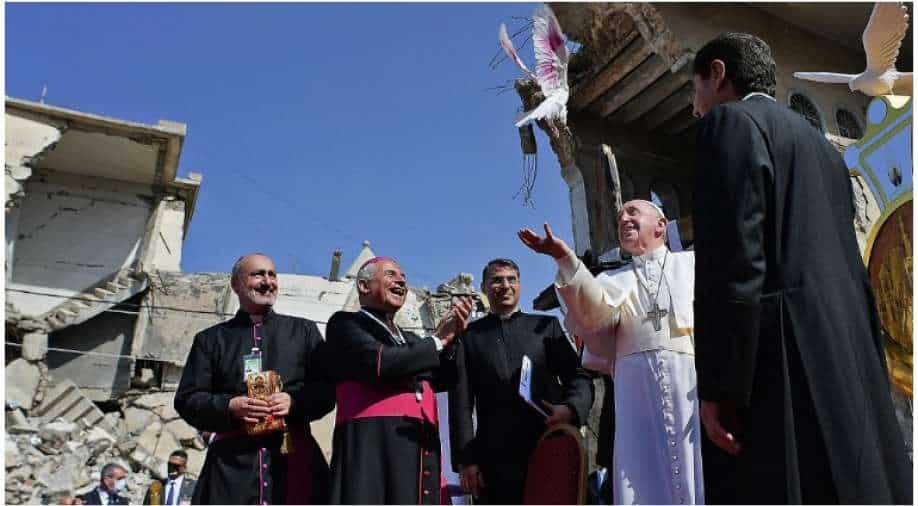 A handout picture released by the Vatican media office, shows Pope Francis, releasing a white dove at a square near the ruins of the Syriac Catholic Church of the Immaculate Conception (al-Tahira-l-Kubra), in the old city of Iraq's northern Mosul on March 7, 2021. Pope Francis, on his historic Iraq tour, visits today Christian communities that endured the brutality of the Islamic State group until the jihadists' "caliphate" was defeated three years ago Photograph:( AFP )

Pope Francis said that exodus of Christians from Iraq and West Asia did "incalculable harm". Mosul, a former stronghold of Islamic State was heavily damaged as fight raged in past few years

Pope Francis on Sunday prayed for 'victims of war' in Iraqi city of Mosul, a former stronghold of Islamic State (IS) group that swept across Iraq and Syria to form a so-called 'Caliphate' in recent years. Pope prayed in a centuries-old church in Mosul, which is an ancient city. Mosul was heavily damaged as fight with Islamic State raged.

Pope Francis said that exodus of Christians from Iraq and West Asia "does incalculable harm not just to the individuals and communities concerned, but also to the society they leave behind." Pope landed in Mosul on Sunday. He arrived in a convoy of five helicopters and amid extremely tight security.

Sunday (March 7) is the last day of Pope's visit to Iraq, a historic development as this is first-ever papal visit to the country. The second day of Pope's Iraq visit marked a momentous occasion as he met Grand Ayatollah Ali Sistani, top religious leader of Shiite Muslims. Both the leaders met at Sistani's residence.

In the evening on Saturday, Pope held a mass in Baghdad's St. Joseph Cathedral. This was the first time that a Pope presided over a mass in this Cathedral.

The Christian community of Iraq, a Muslim-majority country of 40 million, has shrunk from 1.5 million before the 2003 US-led invasion that ousted Saddam Hussein to only 400,000 now, about one per cent of the population.