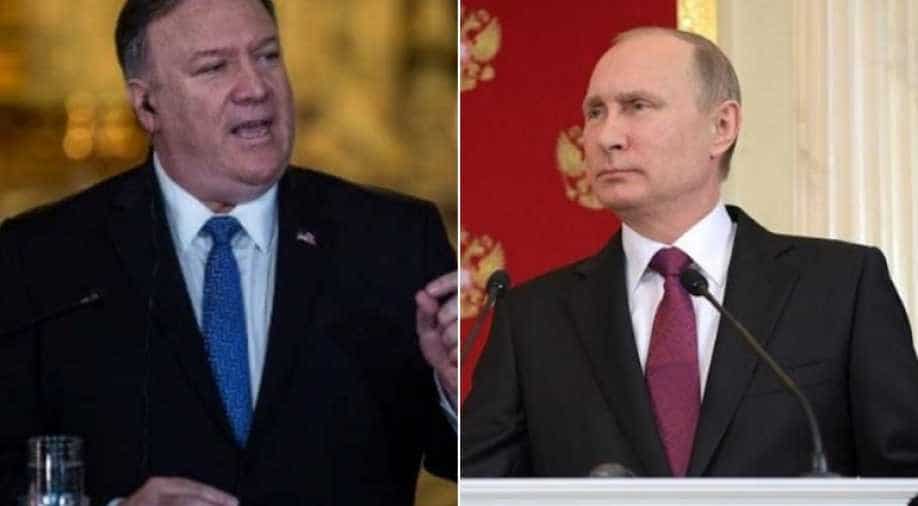 As relations between Moscow and Washington plunge to depths not seen since the Cold War.

US Secretary of State Mike Pompeo will have plenty to talk about with his Russian counterpart Sergei Lavrov when the pair meet in the southern Russian city of Sochi on Tuesday.

As relations between Moscow and Washington plunge to depths not seen since the Cold War, here are topics the top diplomats could address:

Pompeo and Lavrov have in the past weeks called on the other's country to get out of crisis-wracked Venezuela.

Russia slammed the US's "irresponsible" support for a failed uprising against Maduro. Pompeo said Maduro had been ready to leave the country but that his Russian backers talked him out of it.

The meeting in Vladivostok aimed to counter US influence and boost Moscow's role on the Korean peninsula after earlier negotiations between Kim and US President Donald Trump broke down.

Pyongyang has angrily insisted "foolish and dangerous" Pompeo be kept away from further talks.

The report by US special counsel Robert Mueller did not find Trump's campaign team colluded with Moscow but did document widespread Russian attempts to influence the 2016 election.

Pompeo, who has promised "tough actions" on meddling, last month warned Russia would attempt to influence the next US presidential election in 2020.

Moscow has long rejected reports it sought to swing the 2016 vote in Trump's favour.

Moscow has denounced the case against Maria Butina, the only Russian arrested and convicted in the three-year investigation of Moscow's interference in US politics.

Butina, who remains incarcerated in the US, faced "arbitrary" charges, Putin has said.

Meanwhile, US citizen Paul Whelan is in detention in Russia.

The security expert was accused of espionage and arrested in Moscow late last year.

Moscow has rejected the idea Whelan could be exchanged for any prisoner in the United States, saying it does not treat people as "pawns" in diplomatic games.

Russia has criticised Washington's exit from the 2015 nuclear deal, an agreement which curbed Iran's nuclear ambitions in return for sanctions relief.

European counterparts urged Pompeo Monday to de-escalate tensions in the Gulf after Washington sent an aircraft carrier and bombers to protect its interests and President Donald Trump said Tehran would "suffer greatly".

UN inspectors have said Iran is complying with the deal, and Moscow last week denounced new US sanctions on the country's mining industry, calling for new talks to save the nuclear accord.