Poland's nationalists on course to stay in power for second term 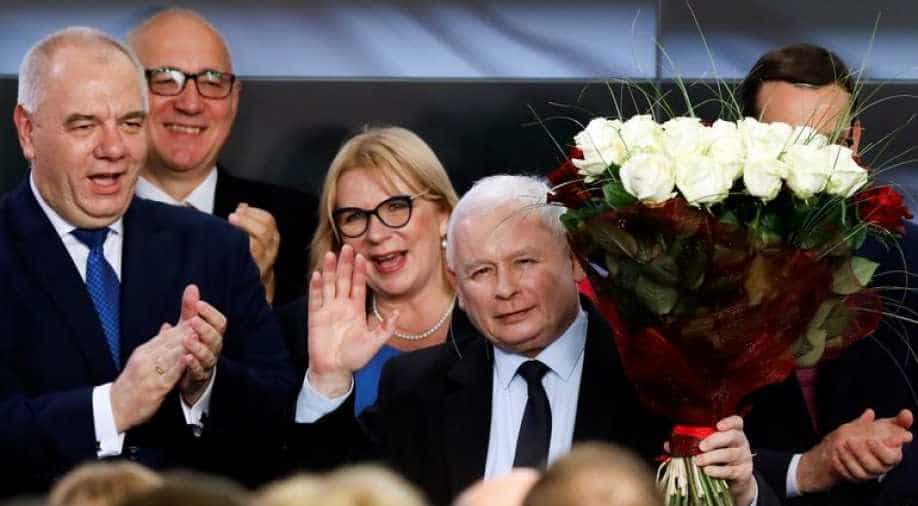 'We have victory,' PiS leader Jaroslaw Kaczynski, 70, told party members at the party's headquarters in central Warsaw, but he added the party had 'deserved to win more'.

Poland's nationalist Law and Justice (PiS) was on course to keep its ruling majority after a general election on Sunday, an exit poll showed, a victory likely to stoke concern about democratic standards in the largest former Soviet European Union state.

A second term for PiS will also bolster anti-immigration populists in the European Union are who keen to scale back the bloc's liberal agenda and who cheer Poland's chafing against Brussels over the rule of law.

The poll by Ipsos gave PiS 43.6% of the vote, with 27.4% of the ballots going to the centrist Civic Coalition, an umbrella group that includes the Civic Platform formerly led by European Union Council President Donald Tusk. A leftist bloc garnered 11.9% of votes in the poll.

"We have victory," PiS leader Jaroslaw Kaczynski, 70, told party members at the party's headquarters in central Warsaw, but he added the party had "deserved to win more".

Opposition groups and Poland's EU partners have said that during its four years in power PiS has undermined the independence of the judiciary, forced public media to promote its agenda and taken other steps to quell dissent.

It has shifted Poland's foreign policy away from the European mainstream, becoming a leading proponent of calls to take some powers away from Brussels.

Throughout the campaign, PiS told voters that business and cultural elites in Poland should be replaced with people who espouse patriotic values, to ensure fair market competition and access to state institutions such as courts.

It has given few details about future policy plans, but Justice Minister Zbigniew Ziobro told reporters after voting ended on Sunday that PiS "had a real plan ... for courts to stop being the ball and chain of the Polish economy."

The party has cast the election as a choice between a society rooted in traditional Catholic values and a liberal order that promotes a chosen few and undermines family life.

Under Poland's complex election rules, the PiS result from Sunday's exit poll would translate into 239 seats in the 460-member lower house of parliament, calculations by private broadcaster TVN showed. PiS has 240 seats in the outgoing legislature.

PiS has drawn support from poorer Poles who feel they have missed out on prosperity since the collapse of communism in 1989. The party has mixed nationalist rhetoric with a vast welfare programme financed by an economic boom.

To build up support, it has depended on close links with Poland's dominant Catholic Church, with senior officials frequently attending religious ceremonies and events, and the party has espoused stronger religious values in public life.

According to Ipsos, voter turnout surged to 61.1%, which, if confirmed, would be the highest in a parliamentary vote since a 1989 partially free election that ushered in the end of communist rule in Poland.

The rise follows mounting political polarisation in Poland, with many PiS opponents anxious about the future of democracy in the country once seen as an exemplar of democratic transition.

"When I talk with my mother, I practice the art of avoidance, I don't get into any ideological discussions with her," said Krzysztof Michalec, 56, as he waited in the sunshine to see Kaczynski cast his vote in Warsaw.

A former opposition activist during communism, Michalec voted for the Civic Platform.

The election will see the return of left-wing parties into parliament after they lost their seats four years ago because of fragmentation.

The Spring party of Robert Biedron, 43, Poland's first openly gay lawmaker, and Together of Adrian Zandberg campaigned as part of a bloc on a promise to end coal mining and sever the links between church and state.

"We did it, we enter parliament as a third-largest political force," Zandberg, 39, was quoted as saying by the state PAP news agency.