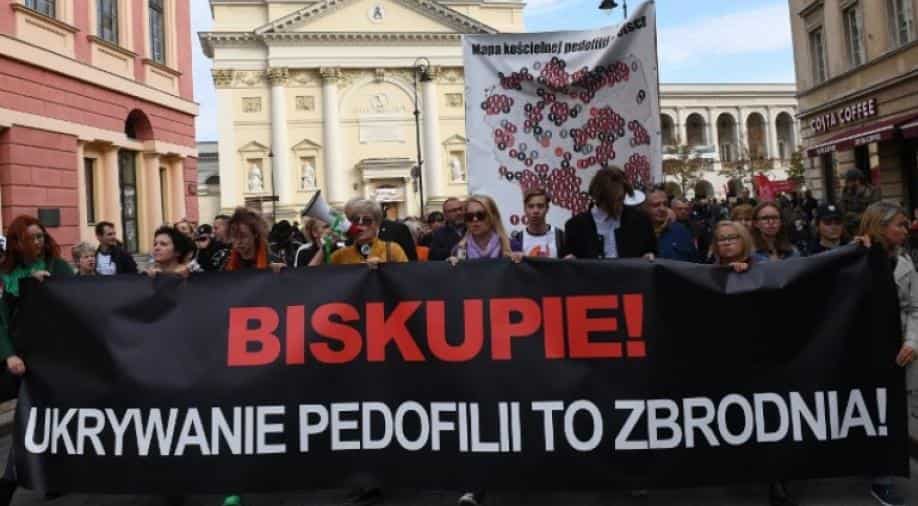 The protestors marched through the capital with banners reading 'Bishop, protecting paedophiles is a crime' and 'We are fed up with the clergy's cowardice'.

Hundreds of people in Warsaw of Poland took streets on Sunday to protest against child sex abuse in the Catholic Church -- a first major such rally in Catholic Poland.

The protestors marched through the capital with banners reading "Bishop, protecting paedophiles is a crime" and "We are fed up with the clergy's cowardice".

The protestors also carried a country's map with the black crosses to mark places where complaints about child sex abuse have been made against clerics.

They also stopped in front of four churches in Warsaw to read out victims' accounts.

Before the archbishop's seat, a long list of Polish cities and towns with documented paedophilia cases was read out to the sound of drums and with the crowd shouting "Shame!" in between.

There are no official statistics on the number of Polish priests convicted of child sex abuse, but a Polish association that helps victims estimates there were around 56 over nearly two decades, including clergy convicted of possessing child pornography.

Protests also took place in other Polish cities including in Poznan where an appeal court on Tuesday upheld a verdict ordering a Catholic priests' society to pay out record damages to a former child victim of a paedophile priest.

The ruling was the first of its kind in a country where the Church still wields considerable influence.

It is under increasing scrutiny worldwide over clerical sex abuse claims.

Pope Francis has called for a meeting of all the heads of Catholic bishops' conferences worldwide at the Vatican next February to discuss the issue of the "protection of minors".

In Poland, the recently released film "Kler" (The Clergy) about abuses and corruption in the Catholic Church drew close to two million spectators within a week -- a record in the country of 38 million.