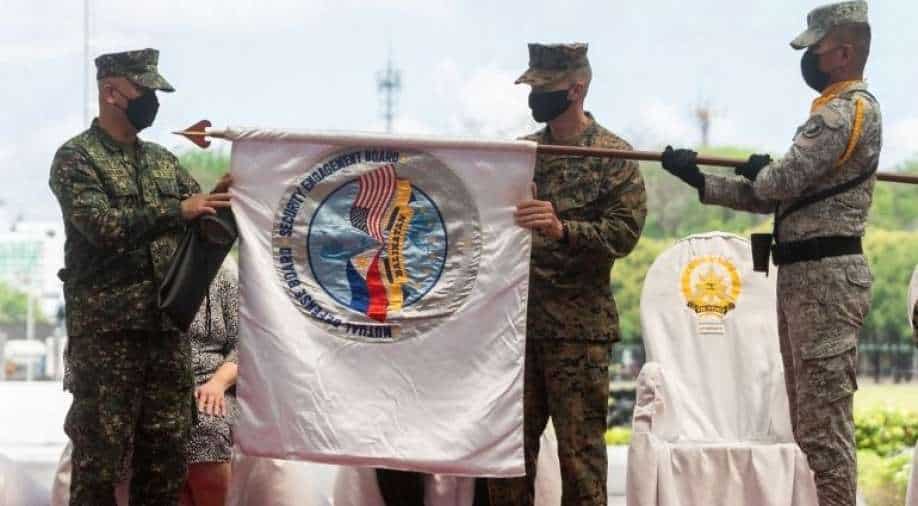 Philippines on Monday held the biggest military exercises in seven years with the United States as China continues to impose its presence over the South China Sea.

The annual exercises, called Balikatan, Tagalog for shoulder-to-shoulder, will run up to April 8 with nearly 9,000 navy, marines, air force and army troops, including 5,100 American military personnel, to strengthen the longtime treaty allies’ “capabilities and readiness for real-world challenges,” US and Philippine military officials said.

Since taking office in 2016, Duterte had sought closer ties with China in exchange for pledges of loans, aid and investment, and distanced himself from the United States, a treaty ally.

But last year he withdrew a threat to scrap a two-decade old pact governing the presence of US troops in the Southeast Asian country.

"We are sending a message to the world that the alliance between our countries is stronger than ever," Philippine Defence Secretary Delfin Lorenzana said in a statement.

The treaty alliance “declares formally our sense of unity and determination to mutually defend against external armed attack, so that no potential aggressor could be under the impression that either of them stands alone,” Philippine military spokesman Col. Ramon Zagala said.

The exercises will cover maritime security, amphibious operation, live-fire training and counterterrorism, as well as humanitarian assistance and disaster relief.

Recent manoeuvres between the two countries focused on potential conflict in the South China Sea, which Beijing claims almost in its entirety.

Trillions of dollars in trade pass through the strategic sea and it is thought to contain rich petroleum deposits, making it a frequent source of regional friction.

China will likely frown on the war drills given their relative proximity to Taiwan, which it claims as Chinese territory, but organisers said the exercises don’t regard any particular country as a target.

In what it calls a warning to Taiwan independence supporters and their foreign allies, China has been staging threatening exercises and flying military planes near the island’s airspace, including on February 24, when Russia began its invasion of Ukraine.

The US and its allies are providing defensive weapons to Kyiv and imposing crippling economic sanctions on Moscow.

Duterte, whose six-year term ends in June, has expressed concern that the Philippines was "involved" in the conflict because of its security alliance with the United States.

That includes a mutual defence treaty and permission for the US military to store defence equipment and supplies on several Philippine bases.

Chinese officials led by President Xi Jinping say they are committed to using peaceful means to bring Taiwan under Beijing’s control. The US has consistently expressed its support for ensuring that Taiwan can defend itself, and Chinese military action against the island in the short- to medium-term is generally considered a remote possibility.

The Balikatan deployment in 2017 had been nearly halved to 5,500 troops from the previous year and stripped of all combat-related exercises at the behest of Duterte, who had viewed them as an obstacle to rapprochement with China.

Live fire exercises returned in 2018 and 2019 but the scale of the drills remained smaller and in 2020 they were cancelled due to the pandemic, while only 640 troops took part last year.

Despite efforts to build closer ties, the Philippines has become more critical of Beijing's actions, including what it calls "swarming" by fishing vessels manned by militia off the disputed Spratly islands, and a blockade of a military resupply mission last year.

Manila also recently summoned China's ambassador over what it called the "illegal intrusion and lingering presence" of a Chinese navy vessel.

China claims most of the South China Sea, through which about $3 trillion in ship-borne trade passes every year. Brunei, Malaysia, the Philippines, Vietnam and Taiwan also have claims on the waterway.