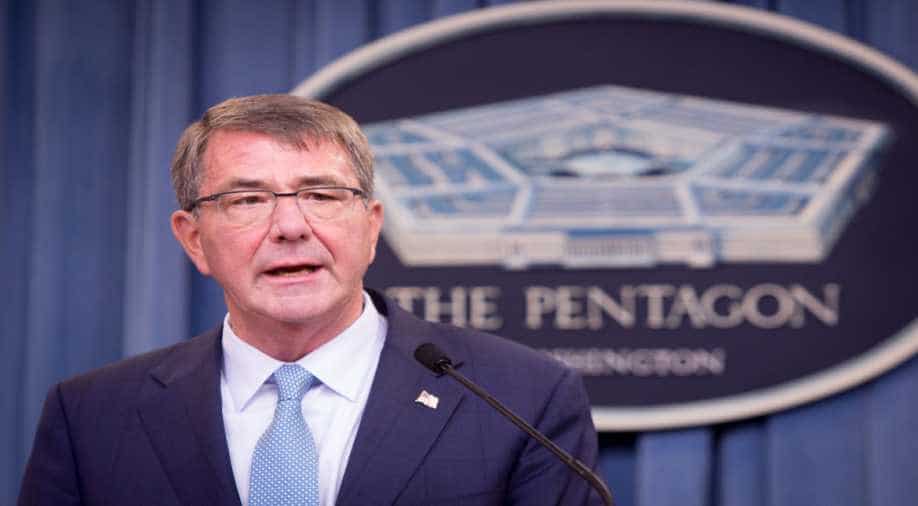 More than two years after IS overran large parts of Iraq as well as territory in neighbouring Syria, Carter wants to highlight successes, even as the jihadists have fought back with devastating attacks. Photograph:( Getty )

Pentagon chief Ashton Carter held taks in Baghdad today over the fight against the Islamic State group and the strategy to recapture Iraq's second city Mosul from the jihadists.

Carter met with Prime Minister Haider al-Abadi and Defence Minister Khalid al-Obeidi, two days after Iraq announced the recapture of a base south of Mosul seen as an important step toward the eventual battle for the city.

Carter's unannounced visit is his fourth to Iraq since beginning his job in February 2015, which comes two days after Iraqi forces captured an airbase to the south of Mosul that is seen as an important step toward the eventual battle for the country's second city, which has been under IS control since June 2014.

IS also holds territory in neighbouring Syria, but has lost significant ground in both countries, and Carter wants to highlight successes, even as the jihadists have struck back with devastating attacks in Iraq and abroad.

The Sunni extremists have carried out bloody attacks against civilians as they lose ground, including a bombing in Baghdad that killed 292 people this month, one of the deadliest to ever hit the country.

"Let me begin... by expressing the condolences of myself and the United States for the terrorist attacks against the people of Iraq in recent weeks," Carter told Abadi.

"You have our sympathy but also it further strengthens our resolve to help in the defeat of (IS), which all of our societies need because all of our societies are subject to attacks.""I also want to congratulate you on the string of successes that the Iraqi security forces have had," said Carter.

The Qayyarah airbase, which Abadi announced Saturday had been recaptured, is located 60 kilometres (35 miles) south of Mosul and can serve as a launchpad for future operations to recapture the city.

Ahead of his meetings, Carter told journalists that he would discuss the next moves in the war against the jihadists.

"What I'll be discussing with Prime Minister Abadi and our commanders there are the next plays in the campaign, which involve the collapse and control over Mosul," Carter said aboard a military plane.

The ultimate goal, he added, was "the recapture of all of Iraqi territory by the Iraqi security forces, but of course Mosul is the biggest part of that."

US defence officials say the campaign`s first "10 plays" have been successfully completed in the US-led counter-IS campaign in Iraq and Syria.

These steps include the recapture of several important areas across the two countries, including Ramadi in Iraq and Al-Shadadi, a town in northeastern Syria previously considered a strategic IS stronghold.

Pentagon has announced a series a measures to speed up war

Carter and President Barack Obama have been criticised for the pace of the campaign, which began in autumn 2014 and got off to a slow start, particularly in war-torn Syria, where the United States had few assets on the ground to provide targeting information.The Pentagon has announced a series of measures to speed up the war, including a revised mission to train anti-IS rebels in northern Syria and extra advisers for Iraqi forces.

Coupled with coalition air support, the results have seen the IS group losing roughly half its territory in Iraq and about 20 percent of its Syria claim, the Pentagon said.

But the jihadists have struck back against civilians as they lost ground.

On July 3, IS carried out the devastating bombing targeting shoppers in Baghdad that killed 292, many of whom were burned alive, sparking widespread anger among Iraqis, some of whom have accused the government of not doing enough to protect them.

Carter was also to meet with US troops, of whom there are now about 4,000 in Iraq, mainly to train local forces.

The United States has pledged $415 million to help Kurdish peshmerga fighters as they join the fight for Mosul, moving in from the north.