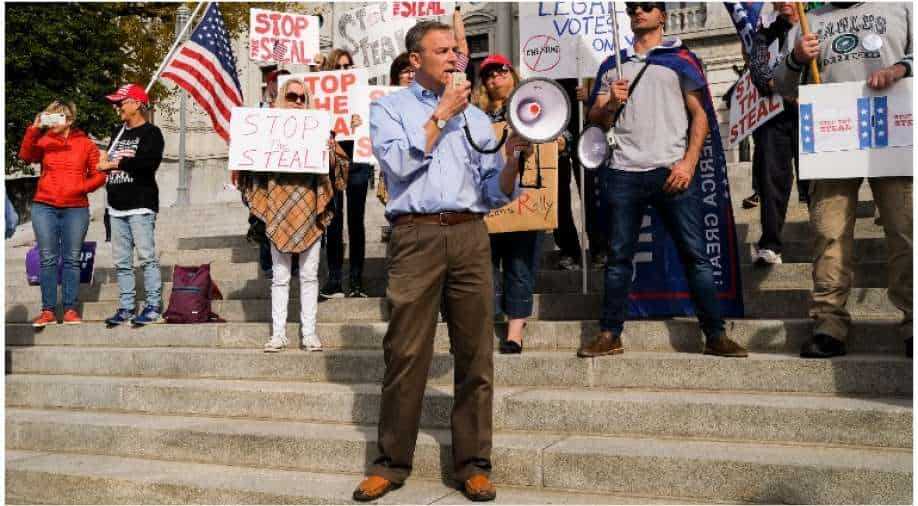 When Rep. Scott Perry joined his colleagues in a monthslong campaign to undermine the results of the presidential election, promoting “Stop the Steal” events and supporting an attempt to overturn millions of legally cast votes, he often took a back seat to higher-profile loyalists in President Donald Trump’s orbit.

But Perry, R-Pa., played a significant role in the crisis that played out at the top of the Justice Department this month, when Trump considered firing the acting attorney general and backed down only after top department officials threatened to resign en masse.

It was Perry, an outspoken member of the hard-line Freedom Caucus, who first made Trump aware that a relatively obscure Justice Department official, Jeffrey Clark, acting chief of the civil division, was sympathetic to Trump’s view that the election had been stolen, according to former administration officials who spoke with Clark and Trump.

Perry introduced the president to Clark, whose openness to conspiracy theories about election fraud presented Trump with a welcome change from the acting attorney general, Jeffrey Rosen, who stood by the results of the election and had repeatedly resisted the president’s efforts to undo them.

Perry’s previously unreported role, and the quiet discussions between Trump and Clark that followed, underlined how much the former president was willing to use the government to subvert the election, turning to more junior and relatively unknown figures for help as ranking Republicans and Cabinet members rebuffed him.

Perry’s involvement is also likely to heighten scrutiny of House Republicans who continue to advance Trump’s false and thoroughly debunked claims of election fraud, even after President Joe Biden’s inauguration this past week and as Congress prepares for an impeachment trial that will examine whether such talk incited the Capitol riot.

It is unclear when Perry, who represents the Harrisburg area, met Clark, a Philadelphia native, or how well they knew each another before the introduction to Trump. Former Trump administration officials said it was only in late December that Clark told Rosen about the introduction brokered by Perry, who was among the scores of people feeding Trump false hope that he had won the election.

But it is highly unlikely that Trump would have known Clark otherwise. Department officials were startled to learn that the president had called Clark directly on multiple occasions and that the two had met in person without alerting Rosen, those officials said. Justice Department policy stipulates that the president initially communicates with the attorney general or the deputy attorney general on all matters, and then a lower-level official if authorized.

As the date for Congress to affirm Biden’s victory neared, Perry and Clark discussed a plan to have the Justice Department send a letter to Georgia state lawmakers informing them of an investigation into voter fraud that could invalidate the state’s Electoral College results. Former officials who were briefed on the plan said that the department’s dozens of voter fraud investigations nationwide had not turned up enough instances of fraud to alter the outcome of the election.

Perry and Clark also discussed the plan with Trump, setting off a chain of events that nearly led to the ouster of Rosen, who had refused to send the letter.

After The New York Times disclosed the details of the scheme Friday, the political fallout was swift. Sen. Dick Durbin, D-Ill., incoming chairman of the Judiciary Committee, told the Justice Department in a letter Saturday that he would investigate efforts by Trump and Clark to use the agency “to further Trump’s efforts to subvert the results of the 2020 presidential election.”

Sen. Chuck Schumer, D-N.Y., the majority leader, said that it was “unconscionable that a Trump Justice Department leader would conspire to subvert the people’s will.” He called on the department’s inspector general, Michael Horowitz, to investigate “this attempted sedition.”

Horowitz has already opened an investigation into whether Trump administration officials improperly pressured Byung J. Pak, who abruptly resigned this month as the U.S. attorney in Atlanta after being pressed to take actions related to the election, according to a person briefed on the inquiry. Durbin is investigating that matter as well.

Trump also tried to force Justice Department officials, including Rosen and the acting solicitor general, Jeffrey Wall, to file a lawsuit before the Supreme Court that would challenge Biden’s victory, according to a person briefed on the request.

One of Trump’s outside lawyers even drafted a brief for the department to file to the court. Department officials and the White House counsel, Pat Cipollone, told Trump that the plan would fail for several reasons, including the fact that the department did not have the grounds to challenge the outcome, the person said.

The fight between Trump and Justice Department officials over the Supreme Court filing was first reported by The Wall Street Journal.

The episode with Clark and Perry is yet another example at impeachment managers’ disposal as they put together their case that Trump should be disqualified from holding office again.

Clark declined to comment on his relationship with Perry, and he categorically denied devising any plan to oust Rosen. He said there had been “a candid discussion of options and pros and cons with the president” that had been inaccurately described by The Times, but he declined to provide details. He declined to say anything more about his conversations with Trump or Justice Department lawyers because of “the strictures of legal privilege.”

Asked whether his conversations with the president had violated the department policy governing contact with the president, he said that senior lawyers at the agency provided legal advice to the White House as part of their duties. “All my official communications were consistent with law,” he said.

Clark, a member of the conservative Federalist Society, had been appointed acting head of the civil division in September. He also oversaw the department’s environmental and natural resources division, where he had worked under President George W. Bush.

Neither Perry nor his top aides responded to repeated requests for comment.

Some Senate Republicans, including Sen. Mitch McConnell of Kentucky, the minority leader, have grown increasingly worried that if they do not intervene and distance themselves from Trump, the havoc wreaked by the former president could hurt Republicans’ political fortunes for years to come. The episode amounts to an unwelcome reminder that damaging information around his presidency could continue to emerge even though Trump is no longer in office.

And Perry’s role in the discussions could further escalate tensions in the House, where Democratic lawmakers were already livid at Republicans for fanning the flames before the Capitol riot, with some rank-and-file members calling for the expulsion of lawmakers who led efforts to overturn the election.

The pressure that Trump placed on the Justice Department, including any plan that he may have considered to remove Rosen, also raises legal questions for him. Trump’s duty as president was to ensure that “laws be faithfully executed for the benefit of the country,” and efforts to interfere in the election could be considered a violation of his constitutional duty, said Neil Eggleston, a partner at Kirkland &amp; Ellis and a White House counsel under President Barack Obama.

There is little chance that a Justice Department letter sent to Georgia lawmakers would have prompted the state to invalidate its Electoral College votes. But the plan was consistent with the posture Perry had taken since November, when he began to falsely claim that there had been rampant fraud in the election, and throughout it all, Perry has remained defiant. Facing calls to resign over his role in the efforts to overturn the election, Perry issued a one-word response: “No.”

Perry, a retired brigadier general in the Pennsylvania Army National Guard and an Iraq War veteran, has been scrutinized for his openness to the conspiratorial. He baselessly suggested that the 2017 mass shooting in Las Vegas by a lone gunman could have been influenced by “terrorist infiltration through the southern border” and refused to support a resolution that condemned QAnon, a pro-Trump conspiracy movement. ( Perry said he believed that the resolution infringed on individuals’ right to free speech and that he did not personally subscribe to the movement.)

An early supporter of the “Stop the Steal” campaign, Perry was one of 126 House Republicans who joined a legal brief in December supporting an extraordinary lawsuit seeking to overturn Biden’s victory. And he joined over two dozen of his colleagues who urged Trump to direct William Barr, the attorney general, to “investigate irregularities in the 2020 election.”

The plan that Perry devised with Clark set off a crisis at the Justice Department. When Clark approached Rosen with the Georgia letter at the end of December, Rosen refused to send it, according to four former administration officials. On Jan. 3, Clark notified Rosen that he would be taking his job at Trump’s behest.

As Rosen prepared to meet Trump later that day and fight for his job, his top deputies, including the acting deputy attorney general, Richard Donoghue, and his outgoing chief of staff, Patrick Hovakimian, convened the department’s senior leaders on a conference call, according to five former officials with knowledge of the call.

They told the department leaders that Rosen’s job was in jeopardy because of Clark’s machinations and said they would resign if Rosen was removed. They ended the call by asking their colleagues to privately consider what they would do if that happened. Over the next 15 minutes, all of them emailed or texted Hovakimian, saying that they would quit.

While Rosen, Donoghue and other top department and White House lawyers spent nearly three hours with Trump and Clark, debating the merits of sending the letter to Georgia lawmakers, Hovakimian drafted an email to the department’s senior leaders, including those who were not aware of what was transpiring at the White House, in anticipation of Rosen’s removal, according to two people briefed on the letter.

In it, he explained that Rosen had resisted Trump’s repeated calls to use the department’s law enforcement powers for improper ends and that the president had removed him, according to a person who reviewed the email. He wrote that he and Donoghue were resigning immediately and encouraged his colleagues to think hard about what they would do and to always act in the interests of the United States.

When Hovakimian received word that Rosen had been allowed to stay, he drafted a new email that he sent to the anxiously awaiting officials: Rosen and the cause of justice had won.