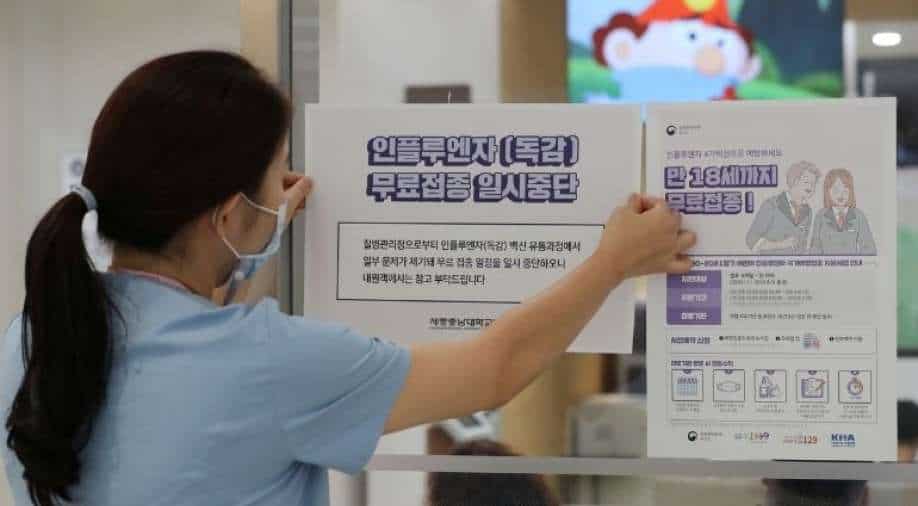 A health worker attaches a notice for suspension of influenza vaccination programs on an entrance of a hospital in Sejong, South Korea, September 22, 2020 Photograph:( Reuters )

In South Korea, nine people have lost their lives after getting flu shots in the last week. This has raised questions about the safety imbued in the vaccine

In South Korea, nine people have lost their lives after getting flu shots in the last week. This has raised questions about the safety imbued in the vaccine.

South Korea recently upped its inoculation programme to ease the complications caused by COVID-19, and to decrease the burden on the country’s healthcare system.

On Wednesday alone, five new deaths were recorded. However, authorities do not plan to halt seasonal vaccination programme.

Investigations are underway to ascertain the cause of deaths. The authorities are conducting post mortars to find any potential link. Preliminary investigations did not point to any link.

"We have reviewed whether it is appropriate to continue the vaccination or better to suspend and wait for the results," country’s health official Kim Joong-gon said during a briefing.

"We came to the conclusion that the deaths had no direct relations with the vaccination given the limited data we have now and without detailed post mortem reports”, Joong-gon added.

The health official added that out of the six victims, five had underlying health conditions. Additionally, no toxic substances have been found in the vaccine, which was given to many others. Reportedly, among the dead are a 17-year-old boy and a man aged above 70.

As winter nears, the country intends to mass inoculate its population to ease the stress caused by the ongoing COVID-19 pandemic.

Just weeks ago, the country’s national vaccine programme was suspended over safety concerns. Reportedly, 5 million doses that require refrigeration at all times were exposed to room temperatures while being transported.

Out of the 19 million eligible for free inoculation, 8.36 million people have already received the vaccine.