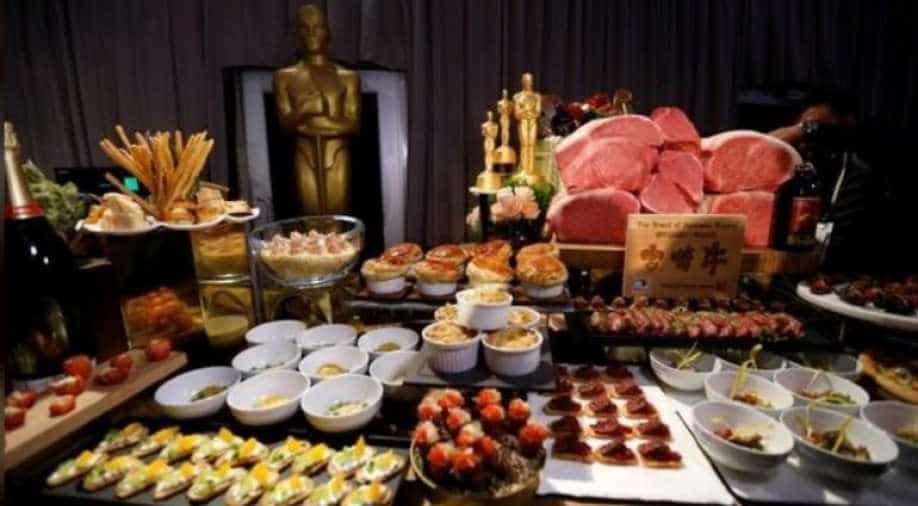 Food on display during a media preview of this year's Governor's Ball. Photograph:( Reuters )

Oscars, the mega Hollywood event, never goes without sumptuous, gourmet spread that is put together to delight the Hollywood film fraternity. This year celebrity chef Wolfgang Puck entered into the 24th year of preparing the post-Academy Awards feast.

Puck, on Thursday, unveiled his menu for the annual Governor’s Ball that will serve up 30 pounds (13.6 kg) of edible gold dust to 1,500 guests of A-listers and Oscar winners.

The 68-year-old chef believes that the delectable spread will not only surprise the palate but will also ensure that no guest goes home hungry.

"You won't go home hungry! We have 300 people in the kitchen. Thank God I am not alone! 900 waiters in the dining room. They make 7,000 mini chocolate Oscars," he was quoted.

After the Oscars are handed out today, the attendees will be treated to more than 50 dishes. Today's menu includes small-plate entrees such as mini pea and carrot ravioli with black truffle, a raw bar featuring caviar parfait with 24-karat gold, and cocktail-inspired macarons like negroni and mojito.

Celebrities and eminent personalities like Nicole Kidman, Jimmy Kimmel, Armie Hammer will be feasting on dishes like chicken pot pie, macaroni and cheese with truffles, eggplant confit with salsa verde, ravioli and risotto with shrimp.

According to reports, more than 1,000 experts got together to prepare the mammoth feast.

Puck walked the red carpet with a chocolate tower and a few of his edible statuettes. He shared that all the leftovers will be donated to the Los Angeles Regional Food Bank.

"People who don't really get anything, they're going to have a meal just like the biggest stars in the world," Puck quipped.