One of first to vote, tiny town of Dixville Notch goes to Clinton 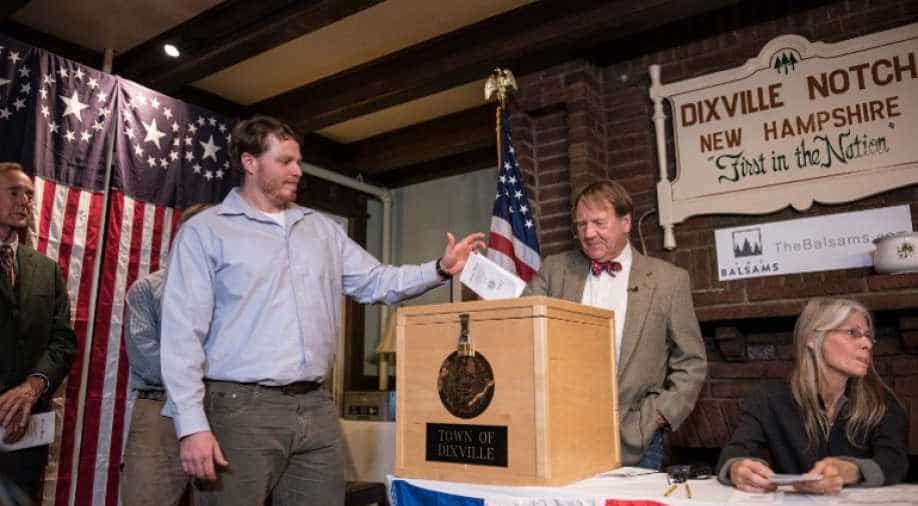 The voting results in Dixville Notch are not predictive of the result of the general election. In 1960, the town voted in favour of Richard Nixon who lost the race to Democrat John F Kennedy. Photograph:( AFP )

Residents of the tiny town of Dixville Notch in the northern part of New Hampshire voted just after midnight on Tuesday (November 8) as one of the first in the United States.

Eight people cast their ballots with 4 votes going to Democrat Hillary Clinton, 2 for Republican Donald Trump and one for the Libertarian Party's Gary Johnson. A write-in vote was cast for 2012 nominee Mitt Romney, who is not running.

The midnight voting tradition started in 1960, by the father of Tom Tillotson, who was the moderator of the 2016 voting session. The tally took only several minutes, and Tillotson shared with Reuters that his vote went to libertarian Johnson.

"I think a very large number of Republicans that basically feel disappointed with the process and the choices we have had, the Democrats didn't put up a better choice, and that the, I personally think it is a sign for either a third party or one of the other parties has to really remake itself to address where people really are," he said.

Clayton Smith, who was the first to cast the ballot said that he voted reluctantly for Democratic nominee Clinton.

"Honestly it was the lesser of two evils which is terrible to say, but I am pretty firmly in the not-Trump side of things. And there are a lot of people on the never-Hillary side of things. ButI couldn't morally consider voting for Trump," Smith told Reuters.

The voting results in Dixville Notch are not predictive of the result of the general election. In 1960, the town voted in favour of Richard Nixon who lost the race to Democrat John F Kennedy.

In 2012, the town saw a tie between President Barack Obama and Republican challenger Romney.

Two other New Hampshire towns, Hart's Location and Millsfield also had midnight voting sessions on Tuesday, but Dixville Notch got the most media attention with reporters outnumbering voters five-fold.