One dead, 10 wounded as shots fired in Sudan capital 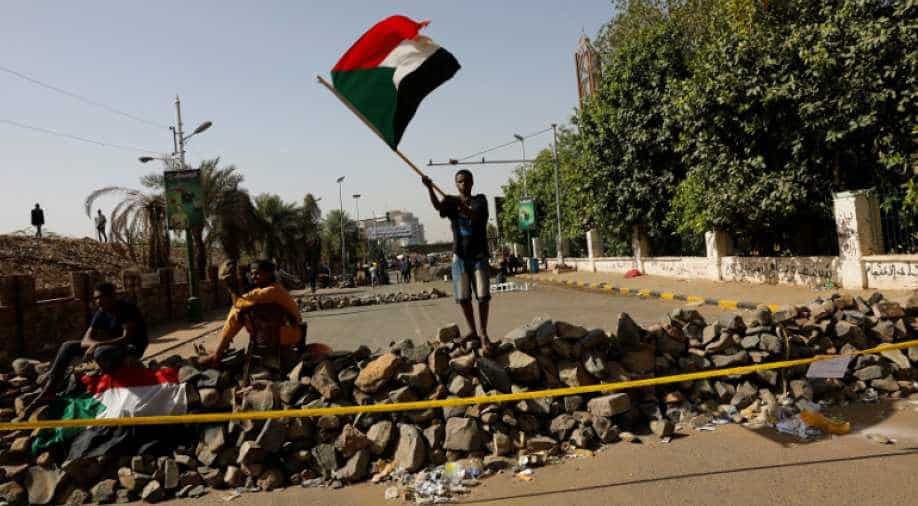 A Sudanese protester waves a national flag on a barricade on a road leading to the defense ministry compound in Khartoum, Sudan. Photograph:(Reuters)
Follow Us

Protesters have remained camped out in front of Khartoum's army headquarters to pressure the generals to yield power.

One person was killed and 10 wounded in the Sudanese capital Khartoum on Saturday when shots were fired near the site of a protest sit-in, a doctors' committee close to demonstrators said.

"After regular forces opened fire, there were casualties on Nile Street near the sit-in site," the Central Committee of Sudanese Doctors said in a statement.

The committee did not specify which forces opened fire or identify those killed or wounded.

A man died "who was hit with live rounds in the head," the committee said.

Soldiers and security forces blocked off the city's Nile Street on Saturday afternoon, while gunfire could be heard in the distance, an AFP reporter said. It was unclear who was firing.

The doctors' committee said three people were wounded by gunfire and most of the other casualties were hit with rifle butts and steel bars, without elaborating.

The military ousted president Omar al-Bashir in April after months of protests against his authoritarian rule.

Protesters have remained camped out in front of Khartoum's army headquarters to pressure the generals to yield power.

The latest violence comes after a man was shot dead Thursday on Nile Street, a day after a woman was killed in the same area.

The latter death happened during a "clash with live fire that took place between the armed forces and uncontrolled elements from it" according to the Sudanese Professionals Association which spearheaded anti-Bashir protests.

Negotiations between protest leaders and the ruling military council have broken down, as the two sides have failed to agree on whether a planned transitional body would be headed by a civilian or a military figure.

The SPA said Saturday it had reason to believe the military council was "planning and working to end the peaceful sit-in at the headquarters with excessive force and violence."

It said it held the military council responsible for "guaranteeing the safety of those at the sit-in".

The military rulers did not immediately comment on the latest violence, but on Thursday warned that incidents on Nile Street threatened "public security and safety".

Authorities would "work in accordance with the law to guarantee citizens' safety and to resolve manifestations of insecurity and lawlessness," the council said.