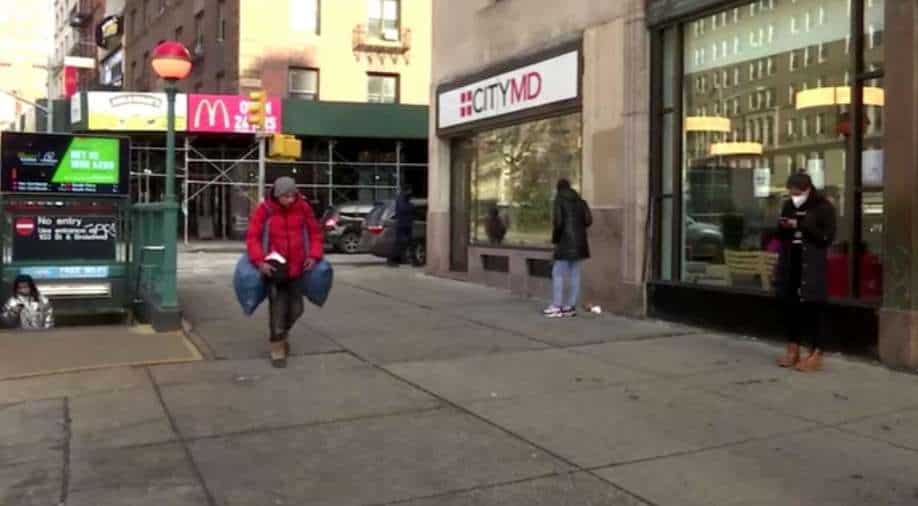 COVID-19 cases in US Photograph:( Reuters )

The Reuters tally shows that nationally hospitalizations are now under 147,000, compared with a peak of 152,746 on January 20

New coronavirus cases are falling in parts of the United States hit hardest by the fast-spreading Omicron variant, according to a Reuters analysis of public health data, offering an early indication the virus might once again be in retreat.

COVID-19 infections nationally are down by 12% in the last seven days compared with the prior seven, the analysis found.

Cases have decreased in states such as New York, New Jersey, Pennsylvania and Maryland, plus Washington, D.C.

That's prompted some health officials to strike a cautious optimist tone on the trajectory of the pandemic.

Dr Anthony Fauci, the nation's top infectious disease official, told MSNBC on Monday (January 24) that it's reached its peak in certain regions of the country.

Wafaa El-Sadr, a professor of epidemiology and medicine at Columbia University, said she expects the drop in cases to go from east to west across the US.

"I think we're beginning to see already peaking in the United States overall. But does that make that mean that we've peaked everywhere? The answer is no. That will be on a rolling basis across the country," she said.

The Reuters tally shows that nationally hospitalizations are now under 147,000, compared with a peak of 152,746 on January 20.

But in many parts of the US infections continue to increase.

And in some states, including North Carolina and Arkansas, COVID-19 hospitalizations are still setting records.

"I think it's a little bit premature to now change abruptly behaviors," Professor El-Sadr said. "I think what we should do is continue to do what makes sense. And by that, I mean, obviously is wearing masks indoors in any public setting."

The death toll from the Omicron variant continues to rise.

Coronavirus deaths hit an 11-month high on Sunday, January 23, climbing 11% in the past week when compared to the prior week, according to the Reuters tally.

COVID-19 fatalities are a lagging indicator, meaning their numbers usually rise a few weeks after new cases and hospitalizations.

On Monday, January 24, the head of the World Health Organization (WHO) warned that it was dangerous to assume Omicron would herald the end of COVID-19's most acute phase, and exhorted nations to stay focused to beat the pandemic.

"I think for many people, there's been this sense of almost anticipation or a hope that there would be one day when COVID would be completely gone, that they'll wake up and say, OK, today there's no more COVID and yesterday there was COVID," said Professor El-Sadr. "This is very, very unlikely. It's very unlikely that we're going to be able to eliminate or even eradicate this virus."

The Omicron death toll has now surpassed the height of deaths caused by the more severe Delta variant when the seven-day average peaked at 2,078 on Sept. 23 last year.

An average of 2,200 people a day, mostly unvaccinated, are now dying due to Omicron.

That is still below the peak of 3,300 lives lost a day during the surge in January 2021 as vaccines were just being rolled out.