OJ: The man who had it all, then threw it away 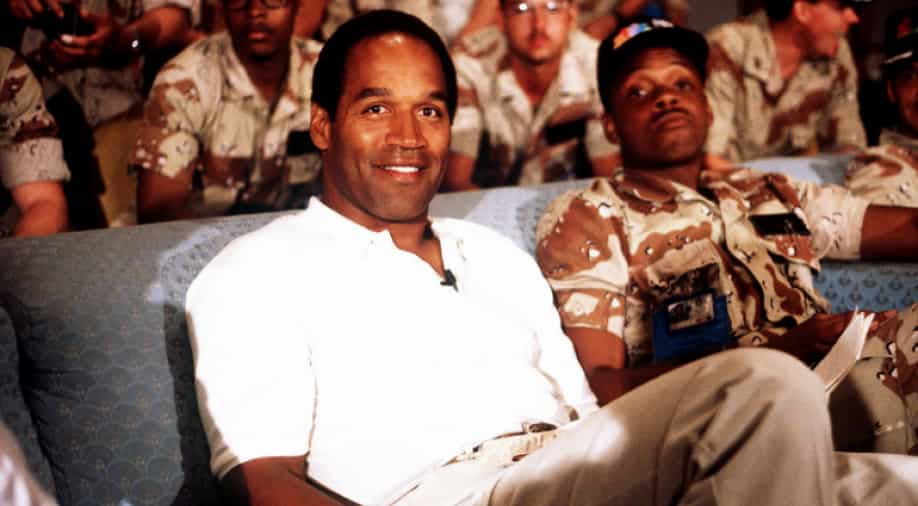 OJ has said he was lucky that he went to the movies at a time when Americans were looking for blacks on the screen. (Image source: Wikimedia Commons, Gerald Johnson) Photograph:( Others )

Good looks, fame, and fortune: O.J. Simpson appeared to have it made after rewriting the record books as an American football star.

But it all came crashing down in 1994 when Simpson, who had parlayed his sports fame into a career as an actor and advertising pitchman, was charged with the murder of his ex-wife and a male companion.

Simpson was famously acquitted of those charges in 1995 but was sent to prison years later for a bungled armed robbery.

After serving nearly nine years behind bars, a parole board in the western state of Nevada approved his release in July -- and Simpson walked free early Sunday.

Now 70, the disgraced former National Football League running back will likely forever be remembered in connection with the murder of his ex-wife, Nicole Brown Simpson, and a friend of hers, Ron Goldman.

His sensational racially charged 1995 double murder trial transfixed America and was dubbed "The Trial of the Century."

Simpson's spectacular fall from grace came after a meteoric rise to stardom that saw him go from an impoverished childhood to the football field and then to Hollywood.

From rags to riches

Born Orenthal James Simpson on July 9, 1947, in San Francisco, he was left in his mother's care at age five when his father left, growing up poor and suffering from rickets, a calcium and vitamin deficiency that warped his legs.

Unable to afford an operation, his mother created crude braces by putting the wrong shoe on each foot and his legs grew stronger, so strong that eventually, he was able to dash 100 yards in 9.9 seconds.

Simpson won the prestigious Heisman Trophy -- for the best player in American collegiate football -- at the University of Southern California in 1968 and was picked number one overall in the NFL draft the next year by the Buffalo Bills.

OJ met Nicole Brown in 1977; she was then an 18-year-old waitress at a Beverly Hills disco. Nicole was later stabbed to death and Simpson, by now her ex-husband, was accused of her murder. (Image source: @robkarnews77) (Twitter)

In 1973, he won the NFL's Most Valuable Player award after becoming the first rusher to gain more than 2,000 yards in a single season.

Simpson retired from football in 1979 and was voted into the Pro Football Hall of Fame in 1985.

He had a short-lived career as sports broadcaster before setting his sights on Hollywood.

Simpson has said he was lucky that he went to the movies at a time when Americans were looking for blacks on the screen.

He appeared in several successful films including "The Towering Inferno," "The Naked Gun" series and "Capricorn One" but never really achieved A-list stardom.

He did, however, strike it big with corporate America and he proceeded to cash in with advertisements for Royal Crown Cola, Schick, Foster Grant, TreeSweet orange juice and Wilson Sporting Goods.

He became best known, however, for iconic Hertz rental car ads in which "The Juice" -- his football nickname -- sprinted through a crowded airport in a three-piece suit.

In 1977, he met Nicole Brown, then an 18-year-old waitress in a disco on Rodeo Drive in Beverly Hills.

Simpson was married at the time to his first wife, Marguerite. The couple divorced and he married Nicole in 1985.

Simpson and Nicole had two children and divorced in 1992 after a tempestuous marriage that included allegations of domestic violence.

On June 13, 1994, Simpson's ex-wife and Goldman were found murdered outside her home in the Los Angeles suburb of Brentwood.

Brown Simpson had been stabbed in the throat so savagely she had almost been decapitated.

Five days after the murders, he led police on a wild car chase on the Los Angeles freeways that was broadcast live and watched by millions.

He eventually surrendered and went on trial in January 1995.

His nine-month trial -- which has been the subject of several television shows, books, and documentaries --  riveted the nation and much of the world.

It featured Simpson at one point struggling to try on a pair of gloves found at the crime scene which apparently didn't fit.

The trial ended with a not-guilty verdict that split the country, largely along racial lines.

But the law caught up with Simpson again.

He was arrested in Las Vegas in 2007 and charged with armed robbery, assault, and kidnapping after a confrontation with two sports memorabilia dealers.

Simpson claimed he was just trying to get back mementos from his sports career which the dealers had allegedly taken from him.

This time, the jury found him guilty and he was sentenced to serve between nine and 33 years behind bars.