'Oh, how I wish my mother was here': Kamala Harris remembers Indian-born mother 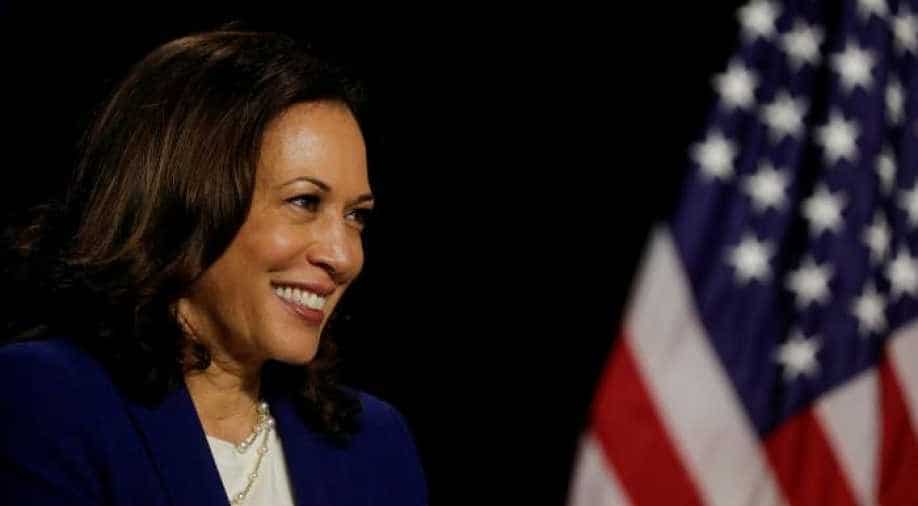 Kamala Harris, 55, scripted history on Wednesday by becoming the first Black and Indian descent individual to be nominated as a vice-presidential candidate of a major political party.

Democratic Party's candidate for United States vice-president Kamala Harris fondly remembered her Chennai-born mother who instilled in her the values of compassion and service to others as she accepted the historic nomination.

She said the qualities helped her grow as a strong Black woman and be proud of her Indian heritage.

Kamala Harris, 55, scripted history on Wednesday by becoming the first Black and Indian descent individual to be nominated as a vice-presidential candidate of a major political party.

Harris opened her vice-presidential acceptance speech on Wednesday night at the virtual Democratic National Convention by remembering her late mother, Shyamala Gopalan Harris, lamenting the fact that she could not be there to see her daughter's achievement.

"My mother taught me that service to others gives life purpose and meaning. And oh, how I wish she were here tonight but I know she's looking down on me from above," she said.

"My mother instilled in my sister, Maya, and me the values that would chart the course of our lives. She raised us to be proud, strong Black women. And she raised us to know and be proud of our Indian heritage,? Harris said.
In reference to her Indian heritage, Harris used a Tamil expression in speaking of ?my uncles, my aunts ? my chitthis."

Harris in her impressive speech said that her nomination is a testament to the dedication of generations before her.
Women and men who believed so fiercely in the promise of equality, liberty, and justice for all, she said.

"This week marks the 100th anniversary of the passage of the 19th Amendment. And we celebrate the women who fought for that right. Yet so many of the Black women who helped secure that victory were still prohibited from voting, long after its ratification. But they were undeterred," she said.

Her acceptance speech comes days after the United States commemorated the centennial of the ratification of the 19th Amendment -- known as the Susan B Anthony Amendment -- of women securing the right to vote.

"Without fanfare or recognition, they organised, testified, rallied, marched, and fought not just for their vote, but for a seat at the table. These women and the generations that followed worked to make democracy and opportunity real in the lives of all of us who followed," she said.

"There's another woman, whose name isn't known, whose story isn't shared. Another woman whose shoulders I stand on. And that's my mother -- Shyamala Gopalan Harris.

"She came here from India at age 19 to pursue her dream of curing cancer. At the University of California Berkeley, she met my father, Donald Harris -- who had come from Jamaica to study economics," Harris said.

The two fell in love in that most American way -- while marching together for justice in the civil rights movement of the 1960s.

"In the streets of Oakland and Berkeley, I got a strollers-eye view of people getting into what the great John Lewis called good trouble," she said.

John Lewis was an American statesman and civil-rights leader.

"When I was 5, my parents split and my mother raised us mostly on her own," she said.

Harris said like so many other women, her mother worked around the clock to make it work.

"Helping us with homework at the kitchen table and shuttling us to church for choir practice," said the Indian-American Senator from California.

She made it look easy, though I know it never was, Harris said, adding that her mother raised them to be proud, strong Black women.

Harris said that even as her mother taught them to keep the family at the centre of their world, she also pushed them to see a world beyond themselves.

"She taught us to be conscious and compassionate about the struggles of all people. To believe public service is a noble cause and the fight for justice is a shared responsibility," she said.

And that led her to become a lawyer, a District Attorney, Attorney General, and the United States Senator.

"And at every step of the way, I've been guided by the words I spoke from the first time I stood in a courtroom: Kamala Harris, For the People," she said, adding that she has fought for children and survivors of sexual assault.
Harris added that she often thinks about what her mother must have thought when she first gave birth at 25-years old at Kaiser Hospital in Oakland, California.

"On that day, she probably could have never imagined that I would be standing before you now speaking these words: I accept your nomination for Vice President of the United States of America," she said.