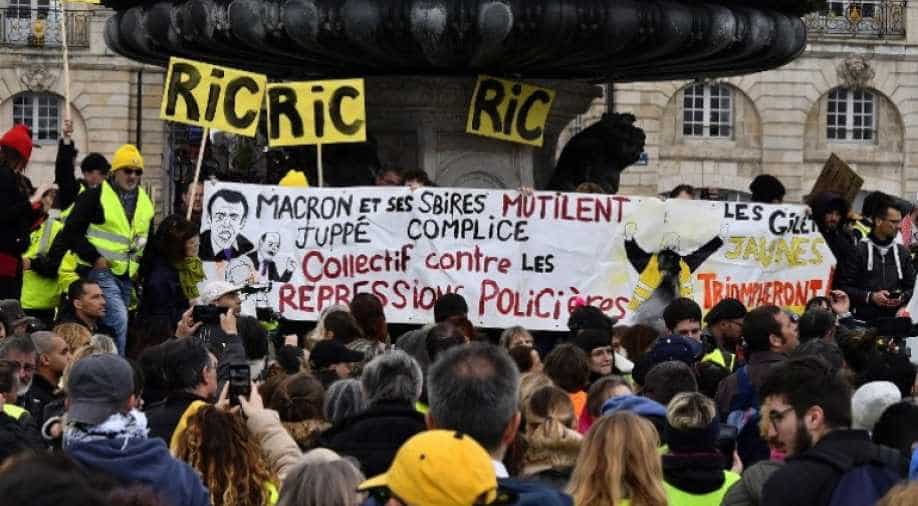 The interior ministry put turnout across France at 28,600, the lowest since the movement began and a significant drop from last weekend's government estimate of 39,300.

Tens of thousands of "yellow vest" demonstrators marched in France Saturday, but the latest turnout figures suggest the movement is struggling to maintain momentum after nearly four months of protests.

The interior ministry put turnout across France at 28,600, the lowest since the movement began and a significant drop from last weekend's government estimate of 39,300.

While the movement regularly disputes the official figures, the numbers are a fraction of the 282,000 at the first march on November 17.

Police headed off protesters who tried to set up a rally on the Champs de Mars, a large park in the centre of Paris.

And separately, about a thousand "pink jackets" -- nursery school assistants and care workers -- turned out in small demonstrations across France calling for better tax and benefit conditions for their work, said organisers.

Saturday's yellow vest demonstrations in several French cities also saw the clashes between police and a minority of protesters that have regularly marred the demonstrations.

One protester marching in the southwest city of Bordeaux, remained stoic, however.

"It's normal that the turnout is less strong," said Andre, one of a number of pensioners marching. "It's raining, it's poor weather, people have the right to stay at home with their family.

"There will be peaks and troughs, but it is going to continue."

Organisers of the movement are already looking ahead to next weekend, which will mark four months of protests. Instead of the usually scattered rallies across France, they want demonstrators to converge on Paris.

That march will also fall a day after the end of French President Emmanuel Macron's "grand national debate" -- internet and town hall meetings to gather opinions on how the country could be reformed -- launched in response to the protests.

The weekly "yellow vest" rallies began in mid-November over a planned hike in fuel taxes.

But they quickly grew into a broader anti-government revolt by people in rural and small-town France who have been angered by Macron's policies.

Police weapons row
The protests have often been marred by violence, while activists have also accused the police of using excessive force and the use of controversial crowd-control weapons.

A French court rejected a bid by campaigners to have the use of such weapons banned. But there has been growing concern abroad as the list of casualties has lengthened.

Michelle Bachelet, the head of the United Nations Human Rights Council, has called on France to investigate reports of excessive use of force by police.

Government spokesman Benjamin Griveaux expressed surprise at the criticism. He pointed out that the IGPN, the body that investigates police abuses, has launched more than 100 investigations into the conduct of officers during the protests.

But the mayor of one French town instructed police to stop using the controversial defensive ball launchers, whose rubber bullets have been blamed for a string of serious injuries to protesters.

Dany Koxher, mayor of Phalsbourg, a town of only 5,000 people in the northeast Moselle region, admitted that the order was purely symbolic -- that he had no power to issue it.

"But as a citizen and an observer, I find that the government's responses are disproportionate against the demonstrators," he told AFP.

In support of his position, he cited both the statement from the UN rights body and an earlier call from the Council of Europe to suspend the use of the weapons.