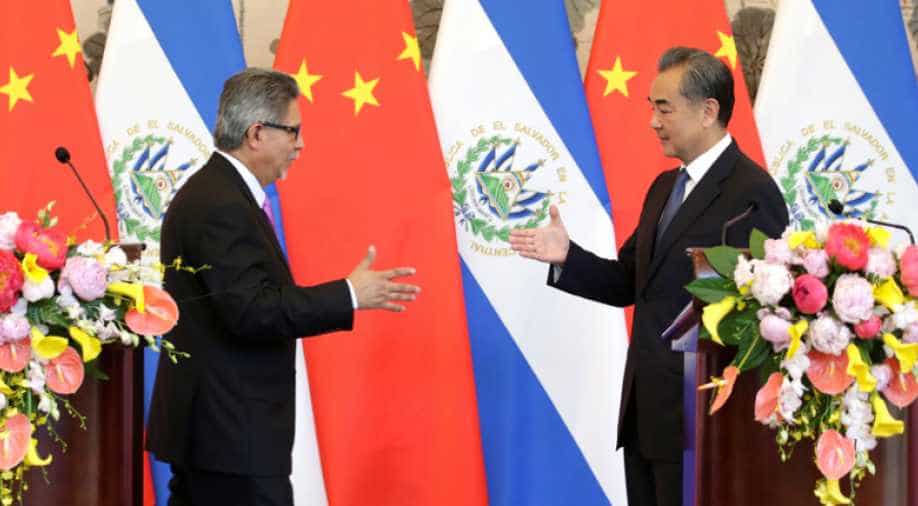 After the Dominican Republic and Burkina Faso broke ties with Taiwan a few months ago, El Salvador today followed suit as it established diplomatic ties with China.

In May, two nations - the Dominican Republic in the Caribbean and Burkina Faso in Africa - had joined hands with Beijing while cutting off ties with Taiwan. Swaziland in Africa is now the only country with whom Taiwan has official ties.

Burkina Faso’s foreign minister Alpha Barry at the time had said that "the evolution of the world and the socio-economic challenges of our country and region push us to reconsider our position" as the African nation broke ties with Taiwan.

On Monday, the foreign ministers of El Salvador and China sealed the move as they signed a document at a ceremony in Beijing to establish relations between the two countries.

Meanwhile, Taiwan foreign minister Joseph Wu said at a press conference that  El Salvador had been continuously asking for "massive funding support" since last year for a port development but Taiwan was unable to assist.

"We are not willing to continue with the money competition with China," Taiwan foreign minister Joseph Wu said at a press conference.

"Pressure from China would only make Taiwan more determined to continue our path of democracy and freedom," he added.

China considers Taiwan as a "breakaway province" and does not recognise it. Beijing claims Taiwan as its own territory under the "One China" policy. Two months ago China began military manoeuvres in the Taiwan Straits, a move which was severely criticised by Taiwan's president Tsai Ing-wen

The Dominican Republic while establishing relations with China had said it "recognises that there is but one China in the world" and that the "People's Republic of China is the sole legal government representing the whole of China, and that Taiwan is an inalienable part of China's territory".

El Salvador is the fifth country Taiwan will lose as a diplomatic ally since president Tsai came to office in 2016, following Burkina Faso, the Dominican Republic, Sao Tome and Principe and Panama.