'Not just neighbours, but brothers': Lithuanian envoy on ties with Belarus amid political turmoil 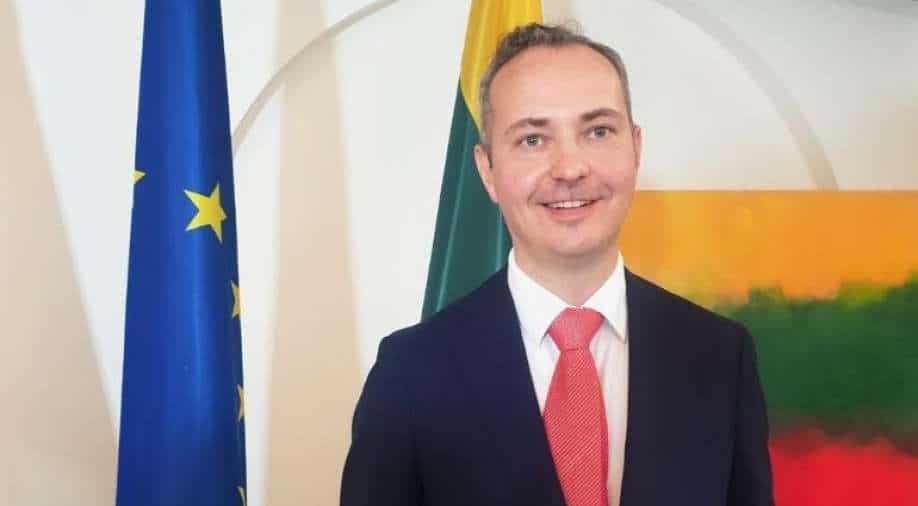 Lithuanian Envoy to India Julius Pranevicius has said that his country continues to stand with Belarus and we "understand each other very well, and we feel not just neighbours but more like brothers sometimes"

Lithuanian Envoy to India Julius Pranevicius has said that his country continues to stand with the people of Belarus and that they "understand each other very well, and we feel not just neighbours but more like brothers sometimes". Amidst the turmoil after the recent controversial elections in Belarus after which Alexander Lukashenko was announced as victorious, opposition leader of the country Sviatlana Tsikhanouskaya had to take refuge in Lithuania.

Speaking exclusively to our Principal Diplomatic Correspondent Sidhant Sibal, Julius Pranevicius also spoke on ties with New Delhi saying,"India was always a good friend and partner in Asia, South Asia and it remains as such."

Approximately, one thousand Indian students are in the country making it the largest group of foreign students in Lithuania. Interestingly, lot of linguistic similarities between Lithuanian and Sanskrit exist, so much so that a common dictionary also exists.

WION: How do you see the ties between India and Lithuania?

Julius Pranevicius: We are in the process of constructing a new government and we expect it will start functioning either later this week or next week. We will have the most gender balance and the youngest government in the history of our country and exceptional in the region. 9 of the ministers are younger than 40 years, and in government, including the PM we have 7 women, and 8 men. I don't expect any major changes in our polices. India was always a good friend and partner in Asia, South Asia and it remains as such. Most of our, people in our new government have knowledge and have been here. Like our next minister of economy, she visited India. I expect, it will form a good basis of good cooperation and high level visits, as well as exchange between business delegation and increased interest between students and universities that help in building ties.

WION: Any areas of collaboration?

Julius Pranevicius: Students from India are the biggest group of foreign students in Lithuania. We have 1000 students from India studying in our different universities, mostly they do engineering, IT or medicine. They are happy with level of education they get in Lithuania. They're also happy with living condition in our country and still the cost of education is not high. Clear focus of our new govt is to improve further the education system, particularly improve the level of our universities. Lithuania will become an attractive place for young people in India. Natural sectors in which we can cooperate, I would start with, IT. India is well known name in Lithuania, we have companies like HCL, they are important player in our IT sector. They have an office and more than 1000 people working for them. They are not only covering Lithuania but broader European region from the office in our country. Digitization of our economy, is focus of the government, that opens opportunities for companies like HCL and others to follow. Biotech is another area where we might see more cooperation happening. In Lithuania, we are enjoying fast growing biotech sector. Every year, we see huge increase in our biotech outcome and 5% of our GDP can soon be coming from life science sector. That is based on our educational system and another opportunity for big Pharma companies from India to come.

WION: India is increasing its engagement with Nordics and Baltics. How can Lithuania play a role in it?

Julius Pranevicius: We are really happy with the cooperation happening now with the India and broader Nordic and Baltic region. I see that we as a bloc could easily be a very good partner with India, when you look at partners for very good innovative solutions. That is the region known for niche production of things. Lithuania can offer financial technologies... If you look at Europe, our country is emerging as a hub. With UK leaving EU, and more and more interest from different companies in Europe for financial technologies they choose Lithuania as the gateway to EU. The model can be used by Indian companies. Other niche areas are ;aser industry. We are a small country, but we're known for laser industry. 10% of all scientific lasers are produced in Lithuania, that is enormous for country the size of Lithuania. It could be done with Indian companies. Lithuanian satellites have been launched from India and increased cooperation in the very fast growing  satellite sector in your country.

WION: Your language has lot of common words with Sanskrit. Study of Indian languages (mainly Hindi and Sanskrit) has been carried out at the Vilnius University for several decades. Any plans to increase engagement on that?

Julius Pranevicius: We have a dictionary we have produced, it has Lithuanian and Sanskrit words that sound exactly the same and we have a whole book on it. It proves we have lot of things in common and not many people know, and still many theories to explain. My native language, one of the oldest language in the region. It is very well preserved, that our ancestors spoke the same language, words, expression as we do. It's a promising and interesting area of research for those doing [sic] in languages, culture. That is why India is so important for us. We have Indology Centre at our university, which is very popular. Indian soft power resonates very well with Lithuanian mind and interest.

WION: How do you see the situation in Belarus? You had hosted the opposition leader, called for EU sanction, what was the rationale?

Julius Pranevicius: With Belarus, we have lot of things in common, we share common history, once we were part of same grand Duchy of Lithuania. The feelings between the people are very close. We understand each other very well, and we feel not just neighbours but more like brothers sometimes. Recent elections are not recognised by my government either and it is very natural, people were upset, the way elections happened and they went out in the streets and that what happened in the country. This is what happens everywhere when people are fighting for freedoms. I think, it is very important for everyone in the world, not just in our region, to show solidarity with Belarusian people and to say the right thing to stand for your freedom. No one will do it for you, you have to do itself. I am thrilled to look how brave the people are, every Saturday and Sunday you have huge rallies, thousands of people who go out in the streets, despite the severe cruel measures taken by people in power. People go to street, to change lives, to live in democracy, in freedom.

WION: What do you think about ties with Russia, and Russia's role in the region?

Julius Pranevicius: For us, we don't have any doubts and dilemmas. We are there, members of NATO and EU. We rely and our security depend on NATO, our joint actions taken with our partners. It's worth mentioning the threats that arise sometimes from what Russia is doing in the neighbourhood, we have bad examples in Ukraine, we have bad examples in Georgia, we see bit of it also in Belarus. It proves that for us, who were cautious about relationship with Russia--we proved to be right. It is now more and more understood by our NATO partners and Nato standing firm and strong to support all its members including Lithuania in organising a defence and being in the alliance, block that would be to difficult to attack and too dangerous to intervene in. That where we base our security, that is where our strategic interest is, and our policies aim too.