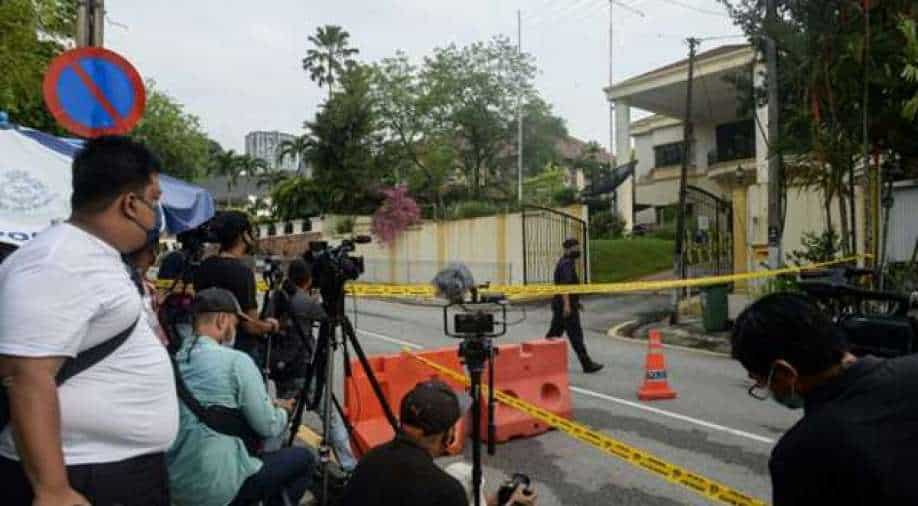 The North Korean flag and a plaque were taken down from the country's embassy Photograph:( AFP )

North Korea's diplomats in Malaysia shuttered their embassy and prepared to fly home Sunday, after Pyongyang severed diplomatic ties over the extradition of a citizen to the US.

The Southeast Asian country had been one of Pyongyang's few allies but ties were already strained following the 2017 assassination of leader Kim Jong Un's half-brother at Kuala Lumpur airport.

A court ruling earlier this month that Mun Chol Myong could be extradited to the US to face money laundering charges for allegedly exporting prohibited items to the North in violation of sanctions proved the final blow.

On Sunday the North Korean flag and a plaque were taken down from the country's embassy -- a large house in an upmarket area of Kuala Lumpur -- and the gates were chained up.

Before departing, North Korean charge d'affaires, Kim Yu Song, accused Malaysia of siding with Washington in a "conspiracy" against Pyongyang, and committing a "large hostile act".

Malaysia had aligned its policies with those of the US, "which seeks to deprive our state of its sovereignty, peaceful existence and development," Kim, the North's most senior diplomat in Malaysia, told a large media pack.

Kim and what appeared to be a group of diplomats and their family members then departed on a bus.

They arrived later at Kuala Lumpur airport, loaded stacks of luggage onto trolleys and went to check in at the counters used by regular passengers.

An airport security official, speaking anonymously, told AFP that about 30 North Koreans are expected to fly to Shanghai later Sunday.

Pyongyang's decision to cut ties came after a visit last week by US Secretary of State Antony Blinken and Pentagon chief Lloyd Austin to South Korea, part of an Asian tour to rally support against the nuclear-armed North and China.

Malaysia denounced Pyongyang's move as "unfriendly and unconstructive", and announced it would close its mission in the North, whose operations had already been suspended since 2017.