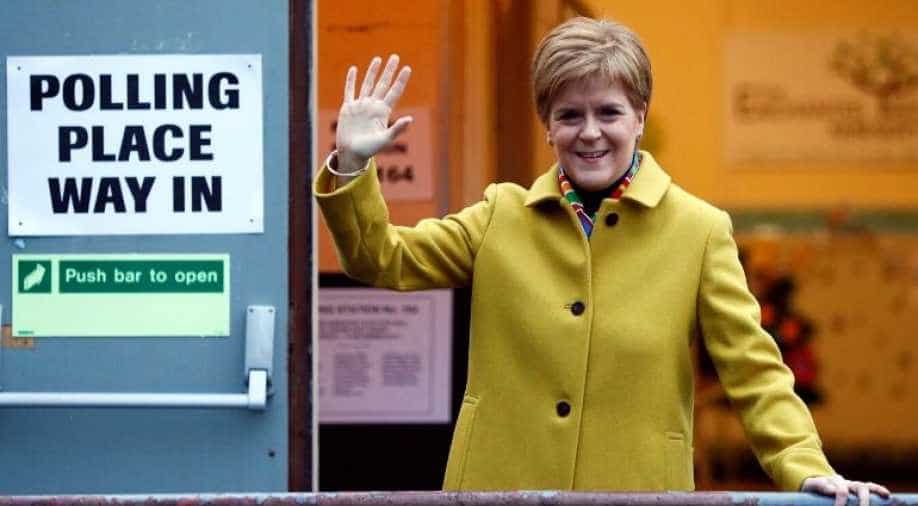 Leader of the Scottish National Party Nicola Sturgeon waves as she leaves a polling station after voting in the general election in Glasgow, Britain, December 12, 2019. Photograph:( Reuters )

Ever since the EU referendum in 2016, the Scottish National Party have argued for a second independence vote so that an independent Scotland could apply to return to the EU.

Scotland's first minister Nicola Sturgeon on Monday was given a green light for her independent country to join the European Union.

Ever since the EU referendum in 2016, the Scottish National Party have argued for a second independence vote so that an independent Scotland could apply to return to the EU.

To bolster the argument, Sturgeon cited the 62 percent vote in favour of Remain in Scotland.

In an interview with British tabloid The Express UK, she said "Any barriers for Scotland in joining the EU are political rather than legal, because any candidate to join the EU has to abide by the terms set. It would be fairly easy to meet those terms because Scottish law is currently fully compliant with EU law.''

"As time goes on there are likely to become greater divergences, but that would simply mean at the time Scotland wanted to join the EU we'd have to change stuff then," she added.

According to public law expert Professor Aileen McHarg, while countries like Spain have shunned Scotland in the past, it could be easy for an independent Scotland to rejoin now as Sturgeon is trying to guarantee Scotland remains aligned with EU law.

In June, Scotland introduced the Scottish Continuity Bill aimed to empower Scottish ministers to make amendments that would enable Scottish law to be aligned with EU law after the end of the Brexit transition period.