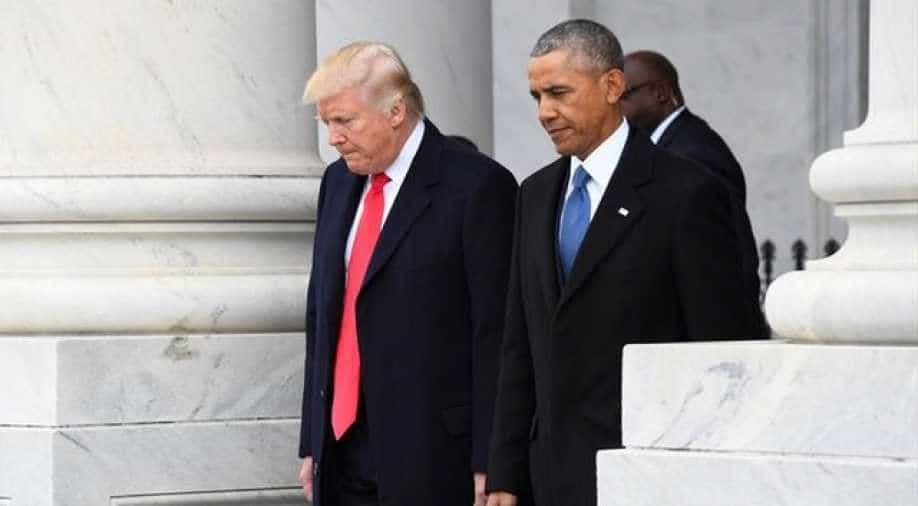 The US Justice Department has confirmed there is no evidence to back up President Donald Trump's claim that his predecessor Barack Obama wiretapped Trump Tower during the 2016 election campaign.

"Both FBI and NSD (National Security Division) confirm that they have no records related to wiretaps as described by the March 4, 2017 tweets," the department said in a court filing dated Friday that came about in response to a freedom of information request by American Oversight, a government watchdog.

The NSD is a division of the Department of Justice.

'How low has President Obama gone to tapp my phones during the very sacred election process. This is Nixon/Watergate. Bad (or sick) guy!' Trump had tweeted on March 4

The FBI had previously shot down the claims, that were made as controversy over alleged links between Trump's campaign team and Russia intensified earlier this year.

"Terrible! Just found out that Obama had my "wires tapped" in Trump Tower just before the victory. Nothing found. This is McCarthyism!" Trump tweeted on March 4.

"How low has President Obama gone to tapp my phones during the very sacred election process. This is Nixon/Watergate. Bad (or sick) guy!" he added.

He also repeated the claim during a White House press conference with Angela Merkel later that month.

National Security Agency Director Admiral Mike Rogers strongly rebutted the suggestion, telling a congressional hearing in March: "That would be expressly against the construct of the Five Eyes agreement that's been in place for decades." He was referring to the intelligence alliance grouping Australia, Britain, Canada, New Zealand and the United States.

Reacting to the findings, Austin Evers, executive director of American Oversight, said: "The FBI and Department of Justice have now sided with former Director Comey and confirmed in writing that President Trump lied when he tweeted that former President Obama 'wiretapped' him at Trump Tower.

"This filing confirms that even Trump's own Department of Justice does not believe he has credibility on a key element of the Russia investigation."

Trump is facing multiple investigations into alleged collusion with Russia, including one led by special prosecutor Robert Mueller who was appointed following Trump's sacking of former FBI director James Comey.

Russian President Vladimir Putin's spokesman on Wednesday confirmed that the Kremlin last year received an email from a lawyer working for Donald Trump about building a Trump Tower skyscraper in Moscow, despite assertions by the then candidate that he had no current business ties to the country.

During his successful presidential campaign, Trump praised Putin as a strong leader and called for a reset in relations with Moscow, but ties have since deteriorated sharply, with the US imposing fresh sanctions on Russia and both countries ordering each other to scale back their number of diplomats.