'No agreement was reached' at Trump, Kim summit: White House 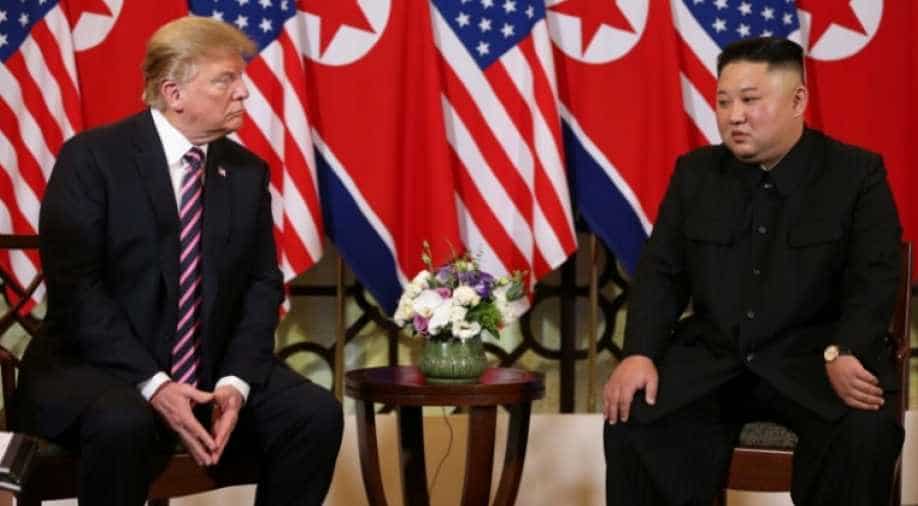 A scheduled working lunch and signing ceremony were cut from the programme at the last minute, with the White House refusing to provide details.

The nuclear summit between US President Donald Trump and Kim Jong Un in Hanoi ended without an agreement Thursday, the White House said after the two leaders cut short their discussions.

But she went on: "No agreement was reached at this time," adding that their "respective teams look forward to meeting in the future,"

No joint communique was issued, despite high expectations beforehand for progress.

In the original White House programme, a  "Joint Agreement Signing Ceremony" was scheduled as well as a working lunch for the two leaders.

In the event, both men left the summit venue without a public signing ceremony and Trump moved up his news conference by two hours, sparking doubts about the progress made at the summit.

The Hanoi summit was supposed to build on their initial historic meeting at Singapore that critics said was more style over substance.

In Hanoi, the smiles and bonhomie remained as Trump touted the "special relationship" between the two but concrete statements were vague.

From the outset, Trump had appeared to downplay expectations of an immediate breakthrough in nuclear talks, saying he was in "no rush" to clinch a rapid deal and was content if a pause in missile testing continued.

He frequently dangled the prospect of a brighter economic future for a nuclear-free North Korea, at one point saying there was "AWESOME" potential.

As in Singapore, the two men put on a show of bonhomie appeared to share jokes in front of reporters.

Looking relaxed but appearing to say little, they indulged in a poolside stroll Thursday around the gardens of the luxury Metropole Hotel, a colonial-era building that has played host to stars ranging from Charlie Chaplin to Brad Pitt.

It echoed a garden walkabout in Singapore, where the two men bonded over Trump's hulking car -- the "Beast" -- with the US president allowing the younger man a glimpse inside.

It was a far cry from the height of missile-testing tensions in 2017 when Trump slammed Kim as "rocket man" and the younger man branded the American president a "mentally deranged US dotard".

In apparently unprecedented scenes, Kim answered unscripted questions from foreign reporters, saying that he would welcome the establishment of a US liaison office in Pyongyang, which would be a step on the way to diplomatic normalisation.

The Pyongyang strongman is looking for relief from sanctions imposed on the North because of its weapons programmes, which saw tensions soar in 2017 before a wave of detente.

He said there were "people who hold a sceptical view of our meeting" but pledged to seek "great, ultimately good results".

"I think watching us have a great time will be like watching a scene from a fantasy movie," he added.

Before the summit, there was talk that there could be a political declaration ending the 1950-53 Korean War which finished technically with an armistice rather than a peace treaty.

There were also hopes Kim could pledge to destroy North Korea's decades-old Yongbyon nuclear complex, which has long been at the heart of Pyongyang's atomic development but remains shrouded in secrecy -- and North Korea has promised to mothball it twice before.

A patent distraction from the summit was a scandal back home in Washington with Trump's former personal lawyer and fixer Michael Cohen calling him a "racist" and a "conman" during a congressional hearing.

The president already showed he had the testimony at the back of his mind when he tweeted about it before his first meeting with Kim, saying Cohen -- who has been sentenced to three years in jail -- was "lying in order to reduce his prison time".