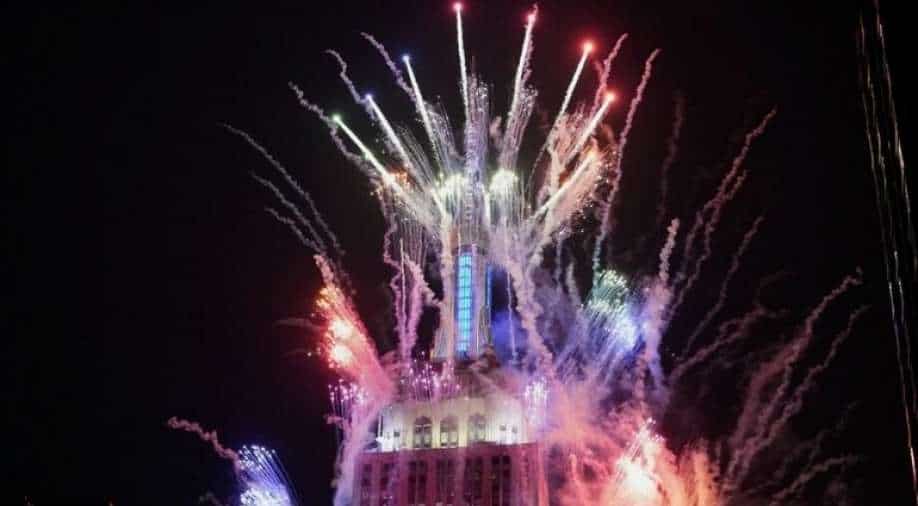 The Empire State Building lights up with fireworks launched from the 72nd, 86th, and 103rd floors on Sunday, to go along with the 2021 Macy's 4th Of July Fireworks Show in New York City to mark Independence Day. Photograph:( AFP )

Landmarks around the state, from the World Trade Center's centerpiece tower to Niagara Falls, were to be lighted in red, white and blue to mark Independence Day (July 4) celebrations

After a year lost to the coronavirus, New York City's most well-known Fourth of July traditions were back. The traditional Macy's Fourth of July fireworks show was back in full form with a display over the East River, with shells being shot from five barges in a televised, choreographed spectacle. This year, crowds were welcome to gather.

The show was broadcasted live on NBC as part of a two-hour special featuring the Black Pumas, Coldplay, OneRepublic and Reba McEntire. The performers' appearances were pre-recorded from around the country in front of live audiences.

Last year, because of pandemic restrictions, there were a series of shorter fireworks shows in the days leading up to the holiday, with the locations kept secret in advance to keep people from congregating.

The annual spectacle of gluttony that is the Nathan's Famous July Fourth hot dog eating contest also once again welcomed live audiences to watch the epic chowdown in Brooklyn.

The event wasn't quite the same as usual. Instead of being at Surf and Stillwell avenues, just off the Coney Island boardwalk, this year's competition was held nearby in a minor league baseball stadium, Maimonides Park. Spectators were asked to register for free tickets in advance.

Last year, though, there were no spectators allowed as Chestnut ate a then-record 75 hot dogs and buns.
He said on Sunday that hearing the fans again helped propel him to victory.

"They kept pushing me. They didn't give up on me," he said in an ESPN interview. "Even if I was uncomfortable, having everybody cheer me and push me, it made me feel good."

Landmarks around the state, from the World Trade Center's centerpiece tower to Niagara Falls, were lighted in red, white and blue to mark Independence Day. "If the last 16 months has reaffirmed anything, it's how precious life is and how vital liberty is to our identity as New Yorkers and Americans," Gov Andrew Cuomo said in a statement.