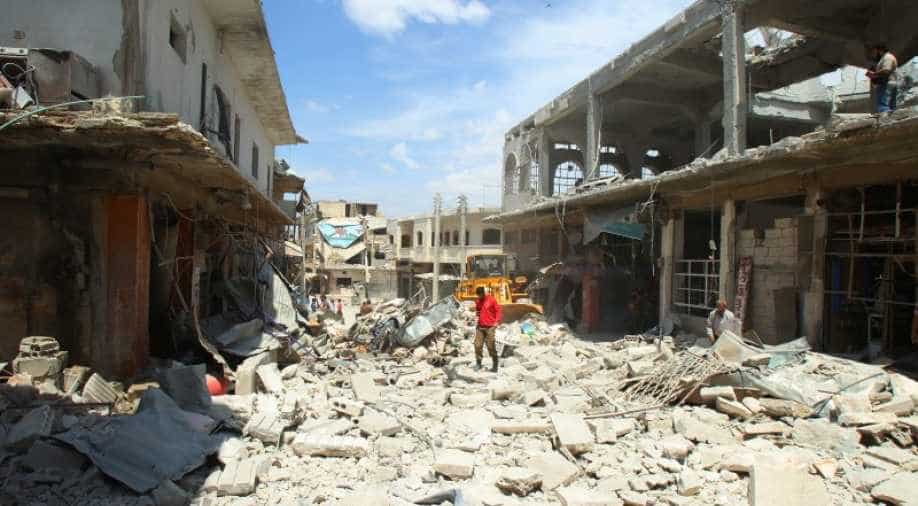 Residents inspect a site damaged by an airstrike in Binnish, in the insurgent stronghold of Idlib province, Syria. Photograph:( Reuters )

The latest airstrikes follow a night of heavy bombardment by Russia and the regime that had already killed at least 20 civilians in the neighbouring provinces of Idlib and Aleppo.

Russian and regime bombardment on the last major rebel enclave in Syria has killed 29 civilians in a day, a monitor said Monday, as the regime's inexorable northward push raises tensions with Turkey.

Six children were among nine civilians killed early Monday in raids on the village of Abin Semaan, in Aleppo province where Russian-backed regime forces have been waging a fierce offensive to retake a key highway, said the Syrian Observatory for Human Rights.

At the site of the raids, a rescue worker carried out the body of a little girl in a thick woollen blanket, while one of her relatives pleaded to take the body, said an AFP correspondent.

Volunteers shivering in near-freezing temperatures hacked away at mounds of rubble, rescuing a dust-covered man and a little child who had been trapped beneath.

The latest airstrikes follow a night of heavy bombardment by Russia and the regime that had already killed at least 20 civilians in the neighbouring provinces of Idlib and Aleppo, according to the Observatory.

Since December, Syrian government forces backed by Moscow have pressed a blistering assault against the Idlib region in Syria's northwest.

The violence has killed more than 350 civilians and sent some 586,000 fleeings towards relative safety near the Turkish border.

The United Nations and aid groups have appealed for an end to hostilities, warning that the exodus risks creating one of the worst humanitarian catastrophes of the nearly nine-year war.

But heightened bombardment has continued.