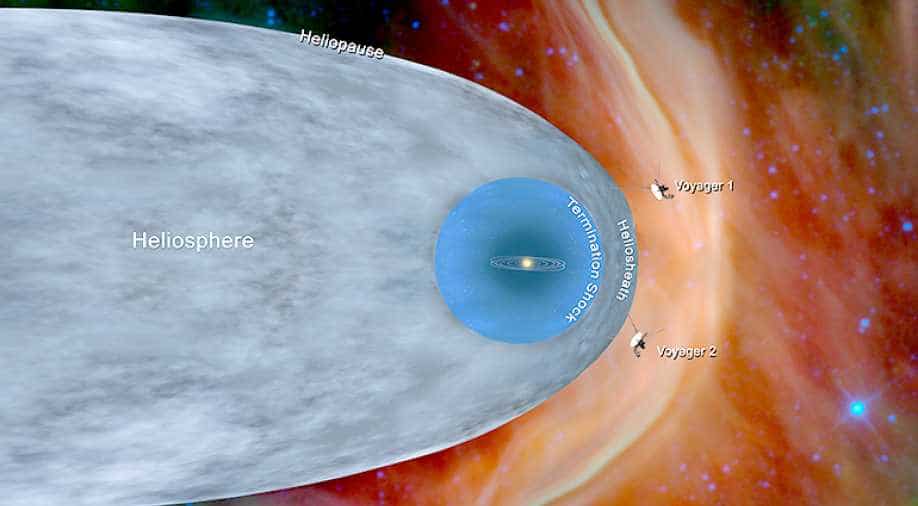 Data from instruments aboard the spacecraft showed it crossed the outer edge of the heliosphere, a protective bubble of particles and magnetic fields produced by the sun, on November 5, the US space agency said.

Voyager 2, a NASA probe launched in 1977 and designed for just a five-year mission, has become only the second human-made object to enter interstellar space as it continues its marathon trek billions of miles (km) from Earth, scientists said on Monday.

Data from instruments aboard the spacecraft showed it crossed the outer edge of the heliosphere, a protective bubble of particles and magnetic fields produced by the sun, on November 5, the US space agency said.

The boundary crossed by the intrepid probe as it journeys a bit more than 11 billion miles (18 billion km) from Earth is called the heliopause, a place where the hot solar wind runs up against the interstellar medium, the soup of stuff residing between the stars of our Milky Way galaxy.

"This is a very exciting time again in Voyager's 41-year journey, so far, of exploring the planets and now the heliosphere and entering interstellar space," Ed Stone, Voyager project scientist based at Caltech, told a news briefing.

Voyager 2 was launched in 1977, 16 days before its twin probe Voyager 1, which reached interstellar space in 2012. Voyager 2's instrument called the Plasma Science Experiment (PLS) is able to provide observations of the nature of this region of space. While Voyager 1 is still going strong on its own journey in interstellar space, its PLS stopped working in 1980.

The Voyager probes were designed to last five years and study the giant gas planets Jupiter and Saturn. Their refusal to die has also let them study Uranus and Neptune, the solar system's outermost giant planets.

Both probes carry a phonograph record. The gold-plated copper disk bears sounds, images and spoken greetings in multiple languages to depict Earth's diversity of life and culture, intended to communicate with potential extraterrestrial beings who may encounter them.

The two probes have not officially exited the solar system, whose outermost region is a shell called the Oort Cloud comprised of numerous small icy objects still under the sun's gravitational influence.

"I often get asked, 'So, is this it for Voyager? You've crossed out of the heliopause. Is it done? Are we finished?' Absolutely not. This is really, for me, the beginning of a new era of heliophysics science," said Nicola Fox, director of the heliophysics division at NASA headquarters.

"We are fortunate enough to have two very brave sentinels that have left our heliosphere and are out truly looking at the other side of the boundary," Fox added.