NASA publishes images of the meteor no one saw 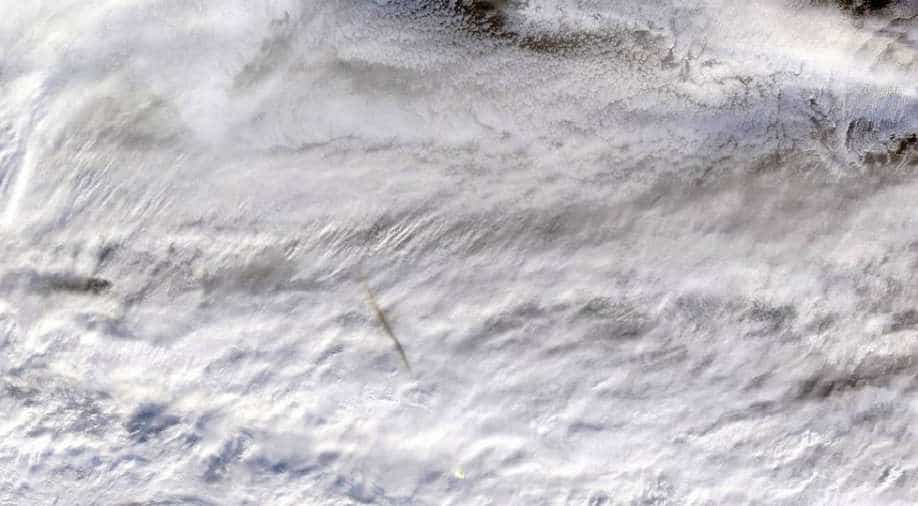 NASA's MODIS instrument, aboard the Terra satellite, captured this true-color image showing the remnants of a meteor's passage, seen as a dark shadow cast on thick, white clouds on Dec. 18, 2018. Image via NASA. Photograph:( Others )

The photographs were taken by two NASA instruments onboard the Terra satellite.

NASA on Friday published satellite photos of a powerful meteor which appeared just above the Bering Sea on December 18 but went unnoticed until months later.

The explosion unleashed around 173 kilotons of energy, more than 10 times that of the atomic bomb blast over Hiroshima in World War II.

Images captured minutes after the fireball disintegrated in the atmosphere show the shadow of the meteor's trail cast on top of clouds, elongated by the sun's low position.

The super-heated air turns the clouds to an orange tint in the meteor's wake.

The photographs were taken by two NASA instruments onboard the Terra satellite.

A still image was taken at 2350 GMT, while five of the of nine cameras on the Multi-angle Imaging SpectroRadiometer (MISR) instrument took another sequence of photos at 2355, which NASA collated into a GIF that shows the orange trail

NASA estimates that the meteor occurred at 23:48 GMT.

Meteors are rocks from outer space that become incandescent upon entering the earth's atmosphere as a result of friction. They are also known as shooting stars. Pieces which survive intact and hit the ground are known as meteorites.

It was the most powerful explosion in the atmosphere since the fireball that burst over the Russian town of Chelyabinsk in 2013. That was 440 kilotons, and left 1,500 people injured, mostly from glass flying out of smashed windows.

This time around, the blast occurred over waters, hundreds of kilometres off the Russian coast.

The first photo of the event was taken by a Japanese weather satellite and published only this week.