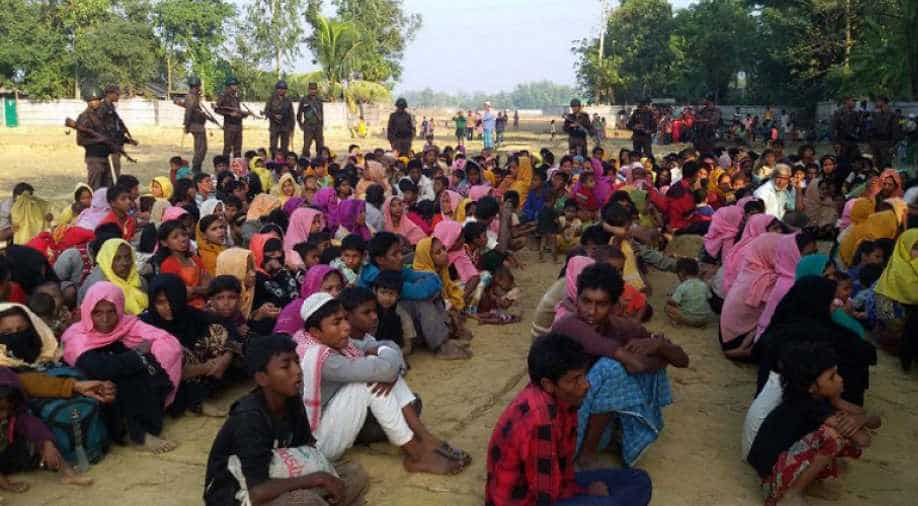 Rohingya Muslims, who tried to cross into Bangladesh to escape violence, are kept under watch by security officials in in Teknaf on December 25. Photograph:( AFP )

Myanmar's security forces have committed mass killings and gang rapes of Rohingya Muslims and burned their villages since October in a campaign that probably amounts to crimes against humanity and possibly "ethnic cleansing", the UN human rights office said on Friday.\

“The devastating cruelty to which these Rohingya children have been subjected is unbearable," UN High Commissioner for Human Rights Zeid Ra'ad al Hussein said in a statement.

"I did speak to Aung San Suu Kyi about an hour and a half ago. I called upon her to use every means available to exert pressure on the military and the security services to end this operation," Zeid Ra'ad al-Hussein, whose office issued the report said. "She informed me that an investigation will be launched. She said that they would require further information."

One woman told UN investigators how her eight-month baby boy had had his throat slit. Another was raped by soldiers and saw her five-year-old daughter killed as she tried to stop them.

Around 66,000 people have fled from the Muslim-majority northern part of Rakhine State to Bangladesh since Myanmar's military launched a security operation in response to attacks on police border posts on October 9, the UN report said. The UN humanitarian office has recently put the figure at 69,000.

"The 'area clearance operations' have likely resulted in hundreds of deaths," some of them through helicopters shooting at villages and dropping grenades on them, the report said.

Four UN investigators gathered testimony last month from 220 Rohingya victims and witnesses who fled the "lockdown area" in Maungdaw in Rakhine for the Cox's Bazar district in Bangladesh.

Nearly half reported a family member had been killed or disappeared while 101 women reported having been raped or subjected to sexual violence, it said.

Testimonies pointed to "a persecution on ethnic grounds which is similar to what has been, in other contexts, described as 'ethnic cleansing'," UN mission leader Linnea Arvidsson told a news briefing.

"The findings and gravity of the situation are really so stark that something needs to be done -- for accountability, but primarily for the violence to stop."

She said the UN Human Rights Council could refer the issue to the UN Security Council, which in turn had the power to pass it to the International Criminal Court.

The investigators took evidence including photographs of bullet and knife wounds, burns, and injuries resulting from beatings with rifle butts or bamboo sticks.

The plight of the stateless Rohingya, of whom some 1.1 million live in apartheid-like conditions in Rakhine, has long been a source of friction between Myanmar and Bangladesh.

In Yangon, the spokesman for President Htin Kyaw’s office said the government had not yet seen the report.

"We will review the report from the UN and we will respond, either in an official statement or in an individual response (to questions)," Zaw Htay said.

While denying observers and independent journalists access to the conflict area, officials have accused Rohingya residents and refugees of fabricating stories of killings, beatings, mass rape and arson in collaboration with insurgents who they say are Rohingya terrorists with links to Islamists overseas.

Zeid called for a robust reaction from the international community and said Myanmar must accept responsibility for committing grave human rights violations against its own people.

The report said the attacks on the Rohingya "seem to have been widespread as well as systematic, indicating the very likely commission of crimes against humanity".