Millennial women protest Trump in the streets, many for first time 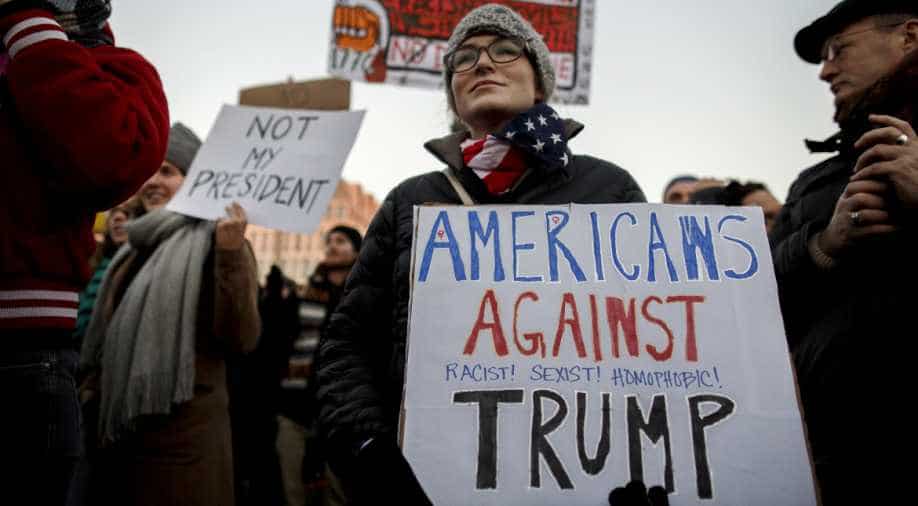 Representative image: Protesters critical of the recent election of Donald Trump as US President gather for a demonstration near the Brandenburg Gate on November 12, 2016 in Berlin, Germany. Photograph:( Getty )

Millennials, some so young they need their parents' permission and others with babies in tow, will join women's protests this weekend as their generation for the first time faces challenges to rights they have known most of their lives.

Hundreds of thousands of people are expected to attend the Women's March on Washington and sister marches in other cities around the world on Saturday, the day after Donald Trump is sworn into office as US president.

The display of unity is a show of opposition to Trump's potential impact on women's rights, particularly abortion access, health insurance, child care and workplace policies that could take a heavy toll on young women, activists say.

"Everything that can affect the population in general is going to affect millennial women," said Jamie Kenney, 34, a New Jersey writer and mother of two young children.

"Because we are young and because our careers aren't established and because most of us have uteruses, it's going to hit us in ways that it hits everybody and in ways that are going to be unique and harder to overcome," said Kenney, who planned to attend a women's march in New York City.

Along with the main march in Washington, more than 270 others are planned in the United States and in 33 other nations, with more than 500,000 people expected to join, organizers say.

The marches call for reproductive rights such as access to abortion and contraception, equal pay, affordable childcare, an end to violence against women and rights for gay, lesbian, bisexuals and transgender (LGBT) people.

Trump has come under fire for his attitudes toward women that emerged as he campaigned for the presidency. In a 2005 tape that came to light during the campaign he brags about groping women and making unwanted sexual advances. He says he opposes abortion and has vowed to pull government funding from Planned Parenthood, a major provider of women's health care.

He wants to repeal the Affordable Care Act, a national insurance program that pays for most birth control methods for women.

"Millennial women have taken all of those things for granted," said Elisabeth Kelan, a professor at Britain's Cranfield School of Management and author of a book on millennials entitled "Rising Stars". "It's a real turning point for this generation," she said.

Most millennials, 73 per cent, have an unfavourable view of Trump, according to the Pew Research Center.

Typically defined as those born between the early 1980s and early 2000s, they number around 74.5 million in the United States, according to Pew.

The Trump presidency will have a lasting effect because people form political identities in early adulthood, said Benjamin Knoll, an associate professor of politics at Centre College in Kentucky who specialises in public opinion and voting patterns.

"For the younger ones now in college and their mid-20s, they're going to come of age at a time when we have Donald Trump as president," he said.

A millennial himself at 34, Knoll said he would attend a local women's march with his 8-year-old daughter.

Alessandra Rizzo, 16, plans to ride the bus to the Washington march after her father agreed she could go with a friend, accompanied by her friend's mother.

"I can't vote," Rizzo said. "So the march is just a way for me to express my dislike of what's going on." Trump's scepticism about climate change and his intention to make abortion illegal are most troubling, she said. "I'll be at the age of having to worry about this when he's the president, and that's just very scary to me," she said.