Leftist Lopez Obrador to be sworn in as Mexico's next President 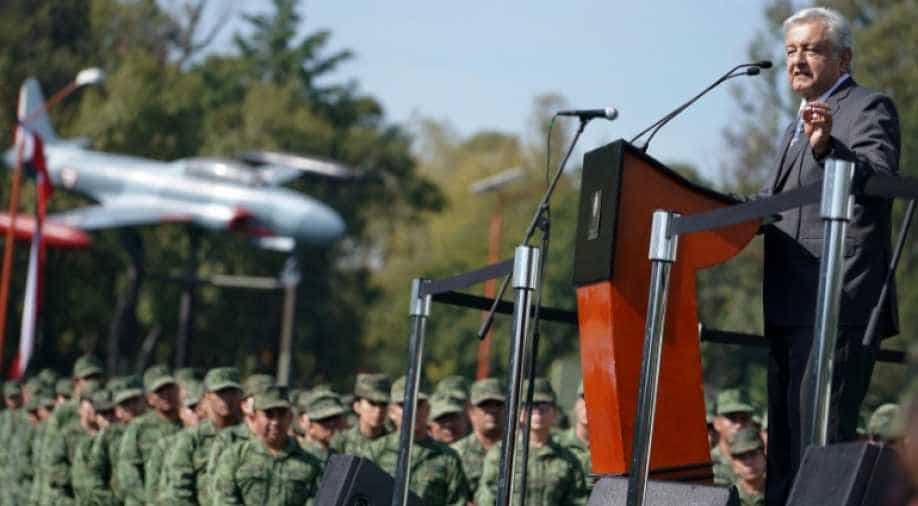 The man, widely known as 'AMLO' is promising a sweeping "transformation" after 89 years of government by the same two parties.

Anti-establishment leftist Andres Manuel Lopez Obrador will be sworn in as Mexico's next president on Saturday, a dramatic change in direction for a country fed up with corruption, poverty and crime.

The man, widely known as "AMLO" is promising a sweeping "transformation" after 89 years of government by the same two parties.

And he appears to have the mandate he needs to deliver it: he won a landslide victory in the July 1 elections, together with strong majorities in both houses of Congress for his coalition - led by the party he founded just four years ago, Morena.

It was the biggest win for any president, and the first for a leftist, since Mexico transitioned to a multi-party democracy in 2000.

But the sharp-tongued, silver-haired leader inherits a sticky set of problems from his unpopular predecessor, Enrique Pena Nieto.

They include endemic corruption, gruesome violence fueled by the war on drug cartels, and the caravan of 6,000 Central American migrants camped at the US-Mexican border -- not to mention the minefield that diplomacy with Mexico's giant northern neighbour has become under President Donald Trump.

Lopez Obrador, a 65-year-old former protest leader and Mexico City mayor, has been short on specifics regarding his plans for all of the above.

Critics accuse him of being an authoritarian radical.

And despite his promises of fiscal responsibility and business-friendly policies, the markets are fearful for the future of Latin America's second-largest economy: Mexican stocks and the peso have plunged in recent weeks.

Dismissing such fears, Lopez Obrador is promising a presidency like no other in Mexican history.

Vowing to lead his anti-corruption, pro-austerity drive by example, he plans to forego the presidential residence and live in his modest home, sell the presidential jet and fly commercial instead, cut his own salary by 60 per cent, and eliminate the presidential security detail.

His inauguration will also look different from that of any previous president.

After taking the oath of office and slipping on the presidential sash before Congress - the usual ceremony - Lopez Obrador plans to go to Mexico City's central square, the Zocalo, to receive a chieftain's staff, in a colourful new take on a traditional indigenous ceremony.

A massive crowd of supporters is expected at the square where, in between a series of concerts by famous musicians, Lopez Obrador will give a second speech from the National Palace.

That long-disused seat of power is where the new president plans to install his offices - sending a message on the kind of change he represents.

With a history that dates back to Aztec times and walls covered in murals by iconic painter and communist Diego Rivera, the palace is a far cry from the current presidential headquarters, Los Pinos a sprawling complex that sits in a leafy park, isolated from the bustle of the capital.

The guest list includes a host of regional presidents -- one of whom, to the chagrin of Mexico's conservative opposition, is crisis-torn Venezuela's President Nicolas Maduro - King Felipe VI of Spain, and US Vice President Mike Pence, accompanied by his boss's daughter and adviser, Ivanka Trump.

President Trump, who is at the G20 summit in Argentina, has struck up a surprisingly warm relationship with Lopez Obrador so far  though the migrant caravan threatens to interrupt that honeymoon.

The American president is pressuring Lopez Obrador to accept a deal to keep asylum-seeking migrants in Mexico while their claims are processed in the United States.

Lopez Obrador's foreign minister, Marcelo Ebrard, is due in Washington on Sunday for talks on the issue with US Secretary of State Mike Pompeo.