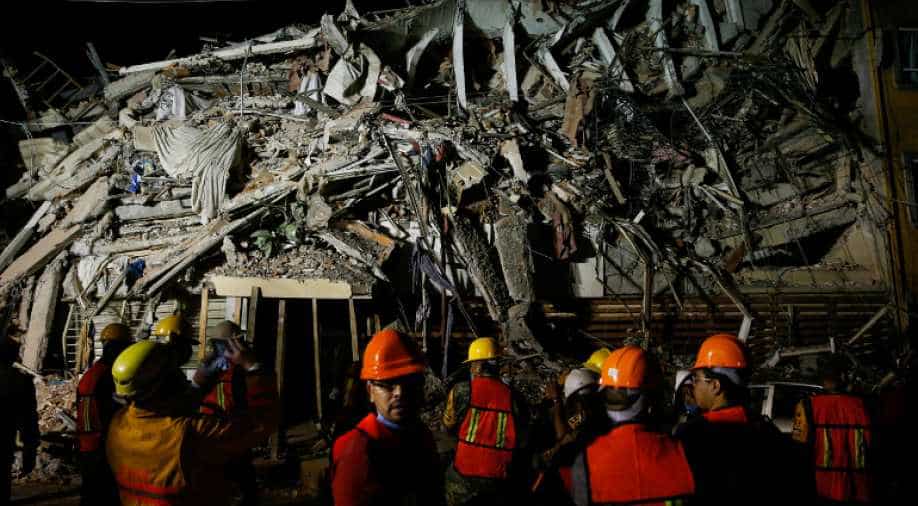 Rescuers work at the site of a collapsed building in Mexico City. Photograph:( Reuters )

Rescuers dug Wednesday for survivors of a 7.1- magnitude earthquake that killed at least 230 people in Mexico, as the nation watched anxiously for signs of life at a collapsed school in the capital.

Firefighters, police, soldiers and volunteers worked frantically to remove rubble in scenes repeated across a swath of central states in Mexico's second killer earthquake this month.

The most agonizing search was at a school in the south of Mexico City where 21 children -- aged between seven and 13 -- and five adults were crushed to death. Many children were still missing.

By Wednesday afternoon, 24 hours after the quake struck, rescuers working under the gaze of anguished parents had managed to locate several signs of life under the rubble using a thermal scanner.

"They are alive! Alive!" shouted Civil Protection volunteer Enrique Garcia, 37. "Someone hit a wall several times in one place, and in another there was a response to light signals with a lamp," he said.

The quake hit on the anniversary of a huge quake in 1985 that killed more than 10,000 people. Tuesday's quake struck just two hours after Mexico held a national earthquake drill, as it does every September 19 to remember the 1985 disaster

"We have been at this since yesterday, but we cannot reach them, because they are trapped between two slabs..."

So far, 11 children and at least one teacher have been rescued from the rubble of the Enrique Rebsamen elementary and middle school.

"No one can possibly imagine the pain I'm in right now," said one mother, Adriana Fargo, who was standing outside what remained of the school waiting for news of her seven-year-old daughter.

In the Condesa neighborhood, Karen Guzman sat on a stool in the street with her back to one of the collapsed buildings. She said she could not bear the tension of the search for around 30 people thought to be under the rubble, among them her brother.

Beside her were two street poles tagged with lists of rescued people, but they do not include the name of her brother Juan Antonio, a 43-year-old accountant who worked on the top floor of the four-story building.

"My mom is looking for him in hospitals because we don't trust those lists. Sometimes I think nobody knows anything," she said.

Rescue workers reported that families were getting WhatsApp messages pleading for help from desperate relatives trapped under debris.

President Enrique Pena Nieto visited the hard-hit city of Jojutla in the state of Morelos and appealed for people to help in reconstruction efforts.

"It is important for people to be part of this group effort," said the president, who also declared three days of national mourning.

Mexico City mayor Miguel Angel Mancera told Televisa TV that 39 buildings in the capital had collapsed. Searches were under way in all but five where rescuers had determined that nobody remained trapped, he said.

At least 53 people have been found alive in two of the collapsed buildings.

Nowhere to go
Many residents were preparing to spend a second night in parks and plazas, in tents or makeshift shelters, unable or unwilling to return to their homes as authorities inspected some 600 buildings whose walls swayed and cracked when the quake struck.

Mexican Foreign Secretary Luis Videgaray thanked the international community for offers of help in an unusual special intervention at the UN General Assembly.

US President Donald Trump called Pena Nieto and offered assistance and search-and-rescue teams which are now being deployed, the White House said.

Chile and El Salvador pledged aid, while Israel said it was sending a team of 70 soldiers including engineers and search and rescue specialists which would arrive Friday.

The quake hit on the anniversary of a huge quake in 1985 that killed more than 10,000 people, the disaster-prone country's deadliest ever.

Tuesday's struck just two hours after Mexico held a national earthquake drill, as it does every September 19 to remember the 1985 disaster.

A system of quake sensors was set up in 1993 along the Pacific coast, where tremors are more common. People in Mexico City were not warned by it on Tuesday because the epicenter was only 120 kilometers (75 miles) outside the capital and thus outside the main area of sensor coverage, said Carlos Valdes of National Center for Disaster Prevention.

Adding to the national sense of vulnerability, the earthquake struck just 12 days after another quake that killed nearly 100 people in southern Mexico.

Experts said the two quakes did not appear to be related, as their epicenters were far apart.

Luis Felipe Puente, the national disaster response agency chief, said that of the dead, 100 were in Mexico City, 69 in Morelos, 43 in Puebla, 13 in Mexico state, four in Guerrero and one in Oaxaca.

In Puebla, a picturesque colonial city near the quake's epicenter, several churches were damaged and one collapsed, killing 11 people, officials said.

Power had been restored to 85 percent of the Mexican capital, although the state electricity company maintained cuts to areas where rescue work was taking place, for fear of accidental electrocution or fires.

In the states of Puebla and Morelos, rescue work is also continuing in homes and destroyed buildings.

Mexico's professional and other football leagues suspended all games scheduled for the weekend.