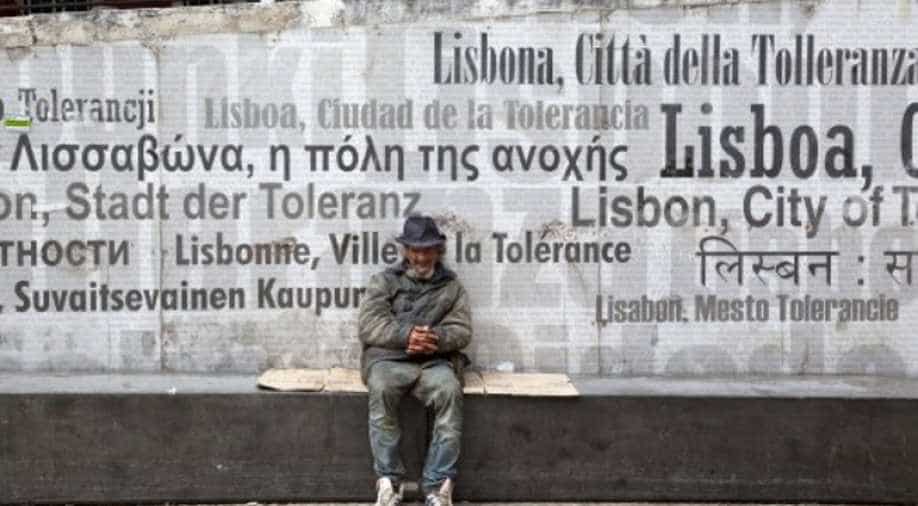 'These lockers are very important. Imagine having to walk up everywhere with everything in the rain,' said Fabio Ferreira Silva. Photograph:( AFP )

Everything Fabio Ferreira Silva owns fits inside one of the 12 bright yellow lockers in front of Lisbon's riverside Santa Apolonia rail station.

Silva and other homeless people use the metal cabinets to store their belongings, which they used to drag around the hilly, cobblestone streets of the Portuguese capital in boxes, bags or shopping carts.

"These lockers are very important," he said holding open the door to his locker where he stores a blanket, clothes, a mobile phone charger, toiletries and personal documents.

"Imagine having to walk up everywhere with everything in the rain."

The so-called "solidarity lockers" were set up by the small charity ACA to make life easier for the city's homeless and help them get back on track.

The first dozen lockers, which have an outer slot for mail and a rod to hang clothes, were set up in 2013 in Arroios, a residential neighbourhood in central Lisbon with wide boulevards.

Another 12 lockers were put up outside the Santa Apolonia train station last year and the association is waiting for approval from city officials to instal 36 more.

The lockers, which are 1.8 metres (nearly six foot) tall and 50 centimetres wide, are assigned to a homeless person for one year and users have 24 hour access to their belongings.

Other cities around the world such as Vancouver and Salt Lake City have set up lockers for the homeless but they are for day use only.

Charities estimate there are just over 800 homeless people in Lisbon.

To obtain and keep using a locker a homeless person has to promise to keep the area around them clean and stay in regular contact with the ACA's street team.

"That is the key to the project's success," said architect Duarte Paiva who designed the lockers and founded ACA in 2007.

"Having a locker is very important but it is not enough. People need solutions to their problems. Often the homeless are suspicious of social services. This is a way to gain their trust."

The street team is helping Silva, who moved to Portugal from Guinea Bissau, a tiny, coup-prone former Portuguese colony in West Africa three years ago, to get a residency permit.

He has struggled to find steady work without the permit and has been sleeping on the streets since his sister -- an unemployed single mother of two -- kicked him out of her house in September because she could not afford to support him any longer.

"I really just need to be able to work," said Silva, 37, who was stylishly dressed in a clean, pink button-down shirt and cap.

'Not a little thing'

"Having a key to your own space also gives people purpose to their lives and a sense of control," she said.

Forty-five people have used a locker since the project was launched.

Many like Marcio Miguel, 36, credit the project with helping them get off the streets.

He moved to Lisbon from Portugal's mid-Atlantic Azores islands earlier this year but quickly found himself living on the streets after he lost his construction job because he abused cocaine and heroin.

Before having a locker he would hide his belongings, clothes, food, documents,to avoid having to carry everything with him. His stuff was often gone when he returned.

"On the streets you can't have food because it disappears. Others who are hungrier than you take it," he said.

"With the locker I started to have more clothes. Before, even after having a bath I had to put on dirty clothes. You either wear the same clothes or you drag everything around."

With the help of ACA's street team he was then able to find low-cost housing and a drug treatment programme.

"A locker seems like a little thing but it's not," said Miguel as he cleared out his stuff from the locker he no longer needs.