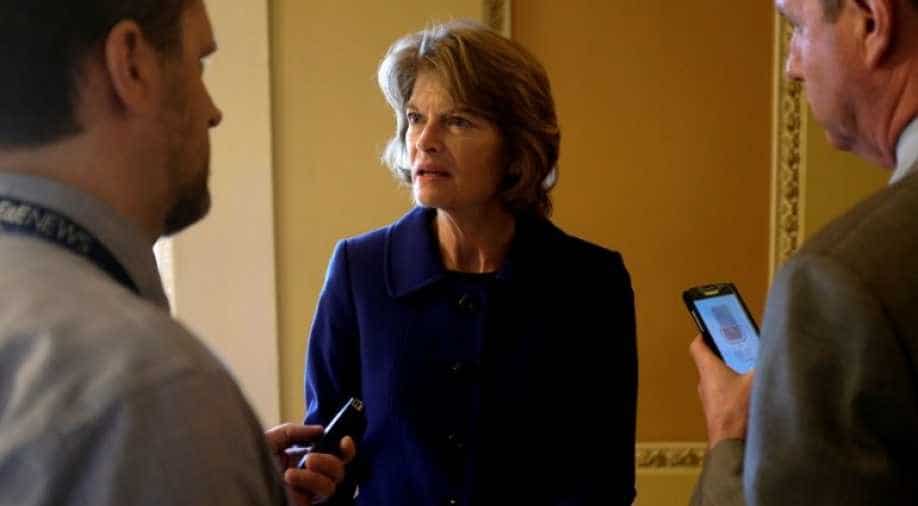 File Photo: US Senator Lisa Murkowski (R-AK) speaks with reporters off the Senate floor in Washington, US Photograph:( Reuters )

The position at the Supreme Court is vacant after the passing of Ruth Bader Ginsburg on Friday. The liberal justice was 87 years old.

Lisa Murkowski, Republican Party Senator from Alaska said on Sunday that she will not support US President Donald Trump's efforts to appoint a Supreme Court judge before US Presidential Elections due on November 3. Murkowski became second Senator to oppose the efforts after Susan Collins of Maine.

“For weeks, I have stated that I would not support taking up a potential Supreme Court vacancy this close to the election. Sadly, what was then a hypothetical is now our reality, but my position has not changed,” Murkowski said in a statement.

The position at the Supreme Court is vacant after the passing of Ruth Bader Ginsburg on Friday. The liberal justice was 87 years old.

Lisa Murkowski said in her statement that she had opposed such a move even in 2016 when a nomination to fill a vacancy was taken up 8 months before Presidential Elections. She said that the window was even smaller this time around.

“I did not support taking up a nomination eight months before the 2016 election to fill the vacancy created by the passing of Justice Scalia,” she added. “We are now even closer to the 2020 election – less than two months out – and I believe the same standard must apply. ”

Murkowski's stand has brought Donald Trump's plans in jeopardy. Trump and Senator Majority Leader Mitch McConnell are trying to fill the position in Supreme Court but the plan may get derailed if more than 3 senators oppose the move. Currently, Republican Party has a majority of 53 in the Senate.

All eyes are now on Mitt Romney, the Senator who is opposed to Donald Trump. Romney was Republican Party's presidential candidate in the year 2012.

He and Donald Trump are not considered to share good equation and Romney had even voted in support of impeachment against Trump.