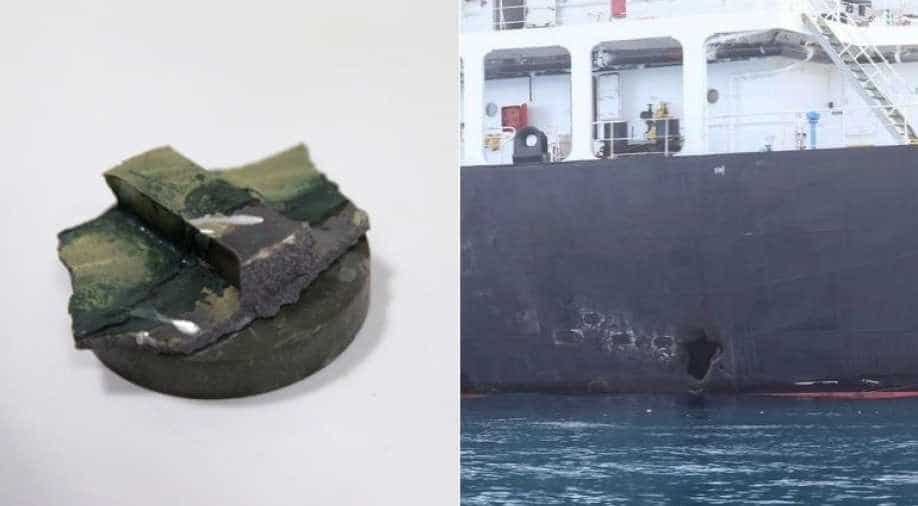 The United States Navy on Wednesday displayed limpet mine fragments and a magnet it said it had removed from one of two oil tankers attacked in the Gulf of Oman last week, saying the mines bore a striking resemblance to Iranian ones.

The United States, waging a "maximum pressure" sanctions campaign against Iran to curb its nuclear and regional activities, has been trying to build an international consensus that Iran was behind last week's blasts, as well as a May 12 strike on four oil tankers off the United Arab Emirates.

Tehran has denied any involvement in both attacks near the Strait of Hormuz, a major transit route for global oil supplies, but the incidents have raised fears of broader confrontation in the Gulf region.

The US military previously released images it said showed Iran's Revolutionary Guard (IRGC) removing an unexploded limpet mine from the Japanese-owned tanker Kokuka Courageous, which was hit by explosions along with the Norwegian-owned Front Altair ship on June 13.

"The limpet mine that was used in the attack is distinguishable and also strikingly bearing a resemblance to Iranian mines that have already been publicly displayed in Iranian military parades," said Commander Sean Kido, commanding officer of an explosive ordinance dive and salvage task group in the Naval Forces Central Command (NAVCENT).

He was speaking to reporters at a NAVCENT facility near the UAE port of Fujairah. Small fragments said to have been removed from the Kokuka Courageous were on display alongside a magnet purportedly left by the IRCG team allegedly captured on video.

The Japanese company that owns the Kokuka Courageous had said that its ship was damaged by two "flying objects", but NAVCENT dismissed this.

"The damage at the blast hole is consistent with a limpet mine attack, it is not consistent with an external flying object striking the ship," Kido said, adding that nail holes visible in the hull indicated how the mine was attached to the ship.

The location of the mine above the ship's waterline indicated the intention was not to sink the vessel, he said.

Kido also said NAVCENT had collected biometric information including fingerprints from the ship's hull that would help in building a criminal case.

He said the United States was working with regional partners on a "joint and combined investigation", but declined to name the countries taking part.

The UAE has said an inquiry into the May 12 attack pointed to a state actor, without naming a country. That inquiry said it was highly likely that limpet mines placed by trained divers were the cause.

"The dynamics of the two attacks are not clear, and the video that the U.S. said demonstrated Iran's role was also not clear," a Western diplomat in the Gulf said.

"The European line is that de-escalation (from possible conflict) must be a priority. Abu Dhabi is very much in line with the EU views on this," the diplomat said.

US Secretary of State Mike Pompeo said on Tuesday that Washington would maintain its pressure campaign on Iran and continue to deter aggression in the region but does not want the confrontation with Tehran to escalate.

The United States said on Monday it would send around 1,000 more troops to the Middle East, in addition to a 1,500-troop increase announced last month that it said was prompted by Iranian threats.