Life under the spectre of war: WION speaks to Indian students in Ukraine's Kyiv 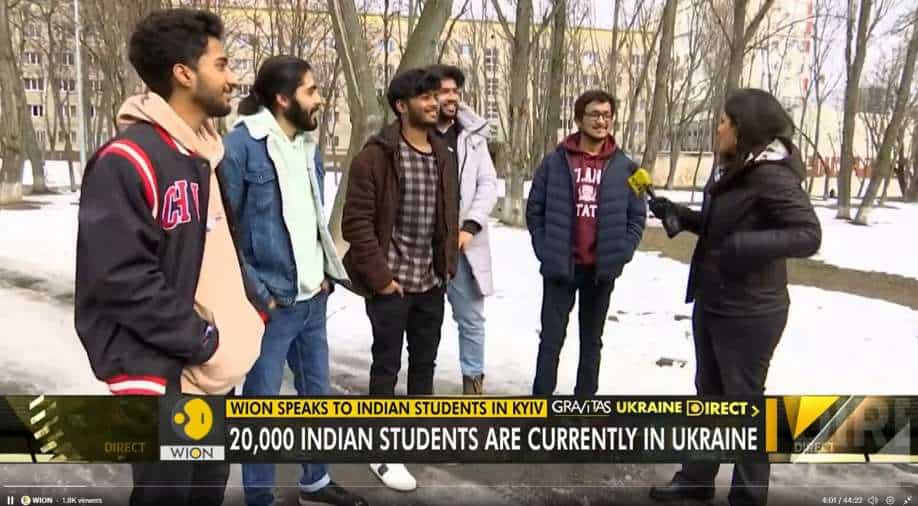 There are around 20,000 Indian students studying medicine and engineering in the east European country. Indians form the biggest student group in Ukraine.

The threat of war looms large over Ukraine. With more than 100,000 Russian troops deployed near its neighbour’s borders, the Ukrainians are preparing for the worst-case scenario.

As tensions between Russia and Ukraine reach a boiling point, world leaders and diplomats shuffle among Washington, Moscow and Ukraine’s capital, Kyiv, to avert a war, which many fear would be catastrophic.

The same has been running around the minds of Indian students who are living in Ukraine.

There are around 20,000 Indian students studying medical and engineering in the east European country.

Indians form the biggest student group in Ukraine. Most of them come here to study medicine.

There are two reasons for that. One, it is affordable. Medical education here is cheaper than in India.

And two, the degrees that they get are recognised both in Europe and in India, so students come here in large numbers.

WION visited the country’s prestigious varsity, Taras Shevchenko National University, in Kyiv to talk to students and understand their life under the spectre of conflict.

As war brews on the border, a sense of worry is palpable in the dormitory. On the face of it, life looks normal on the campus, but the threat of war has been weighing on the mind of these students.

“There are things that are happening overnight. All we are doing is waiting for the updates,” said Shashank, a student at Taras Shevchenko National University.

Expressing similar views, another student says, “I have been here for three years and there has always been a talk of war. But this time it is more serious than before. Let’s see, the US, India are doing things. I don’t think there should be a war. But it is slightly unpredictable.”

These students are not only concerned for their safety, but they also worry about their Ukrainian friends.

“If war happens, we can always go back and create our life in India. We have the option to make our future brighter. Many of us come from a middle-class background, and if anything (war) happens, it will massively impact us. But we still can go back. Whereas, I worry for my Ukrainian friends. I feel that they might lose their independence,” said Madhu Mohan, a fourth-year MBBS student at Taras Shevchenko National University.

Students are banking on the Indian embassy in Kyiv, as they have been evacuated once before. At the beginning of the pandemic, hundreds of students were flown to India through the Vande Bharat mission.

Around two weeks back, the Indian embassy in Kyiv drew up a list, asking the students to fill up forms to collate their information in case they need to be evacuated if a war breaks out.

They say that if any conflict arises, New Delhi will ensure their safety.

“We think we are in safe hands because we are in constant touch with the (Indian) embassy. If there is any kind of evacuation, the embassy is going to take measures accordingly,” said Shashank.

Most of the classes have been going online because of the pandemic. Some students have gone back home while some stayed.