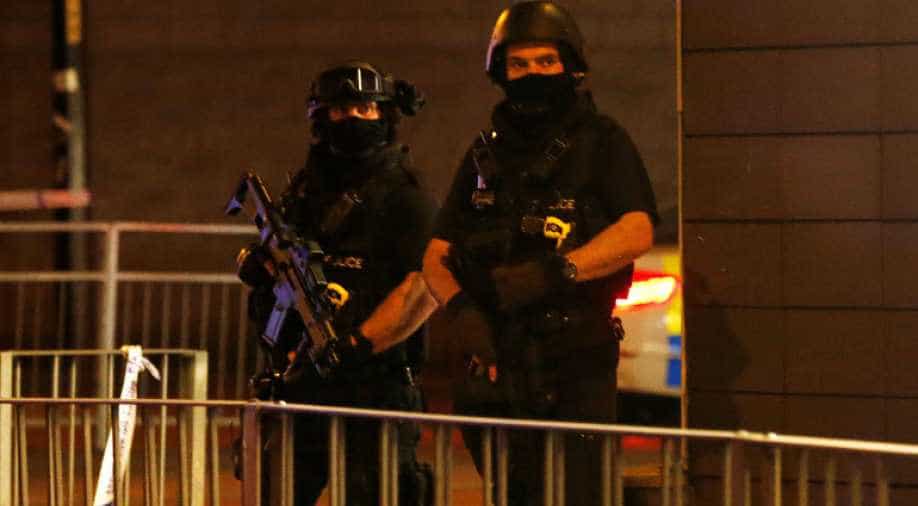 Armed police officers stand next to a police cordon outside the Manchester Arena. Photograph:( Reuters )

Salman Abedi carried out the bloodiest terror attack in Britain in more than a decade when he detonated a suicide bomb after a concert by Grande, leaving many children among the dead.

Libya on Wednesday extradited to Britain the brother of suicide bomber Salman Abedi who attacked an Ariana Grande concert in Manchester in May 2017 and killed 22 people, a security source said.

Hashem Abedi, arrested days after the bombing, "is in the plane headed for Britain" after being handed over to British embassy staff, a spokesman for the force said.

Ahmed Ben Salem of the Special Deterrence Force (Radaa), an armed group which serves as the capital's police, said he was being extradited in line with a decision of the Libyan judiciary following a request from Britain.

A spokesman for Greater Manchester Police could not immediately confirm the extradition.

"We are still awaiting the outcome of the CPS (Crown Prosecution Service) request for Hashem Abedi's extradition from Libya. The extradition proceedings are in progress," he said.

"As proceedings are ongoing, it is essential that we respect the Libyan legal process and therefore we cannot provide any further detail at this time."

The brother is suspected of involvement and is wanted by Manchester police on charges of murder, attempted murder and conspiracy to cause an explosion.

According to Radaa, the brother has allegedly acknowledged that he was in Britain as the attack was being prepared and was "fully aware of the details".

His father was also detained in Libya but released a few weeks later.

Salman Abedi carried out the bloodiest terror attack in Britain in more than a decade when he detonated a suicide bomb after a concert by Grande, leaving many children among the dead.

Libya's internationally recognised Government of National Accord (GNA), which is based in Tripoli, said in April that Hashem Abedi's case was being determined by the North African country's courts.

Libya has been mired in chaos since the ouster and killing of dictator Moamer Kadhafi in a NATO-backed uprising 2011.

The Abedi family, originally from Libya, had fled to the Britain during the dictatorship, but the brothers returned to the country along with their father when the uprising began in 2011.

There has been a surge in fighting since military strongman General Khalifa Haftar launched an offensive on Tripoli, seat of the GNA, on April 4.