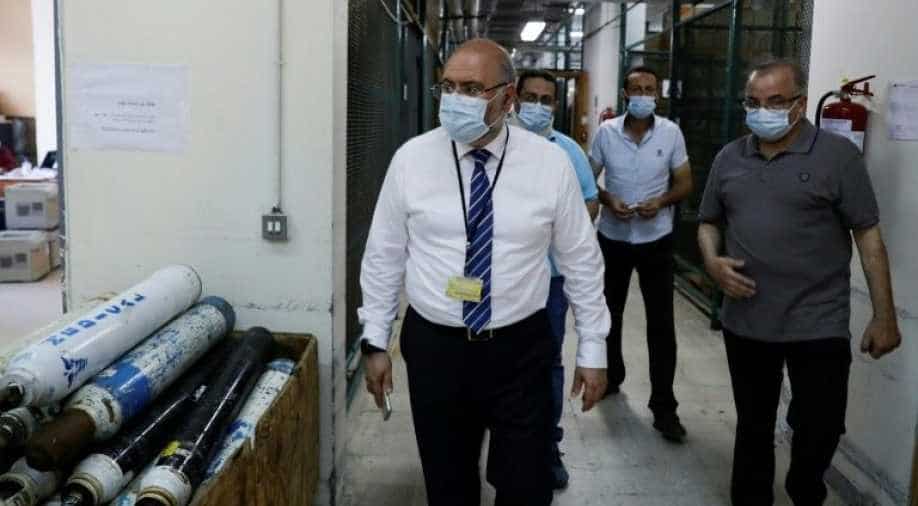 At a time when the country has also been mired in its deepest economic crisis in decades and rocked by runaway inflation and violent street protests, Abiad has emerged as a comforting voice of reason amid the chaos.

Dr Firass Abiad was a little-known Beirut hospital director until the coronavirus pandemic propelled him into the spotlight and restored at least some faith in Lebanon's much-maligned public sector.

At a time when the country has also been mired in its deepest economic crisis in decades and rocked by runaway inflation and violent street protests, Abiad has emerged as a comforting voice of reason amid the chaos.

Before the COVID-19 crisis hit, his Rafic Hariri University Hospital was synonymous with labour strikes over unpaid wages and regarded as a last resort for the neediest patients who have no health insurance.

But since the first coronavirus case was reported in Lebanon in February, Abiad's hospital has taken centre-stage in battling a disease that has infected 4,885 people and cost 62 lives across the country.

His prolific Twitter feed has since become a point of reference for Lebanese for its near daily updates and commentary on the pandemic.

On a typical recent workday, 52-year-old Abiad inspected an outdoors testing centre and then checked in via video call with his staff, wearing full protective gear inside the coronavirus ward.

Playing down his newfound celebrity, a local equivalent of that surrounding US top infectious diseases specialist Anthony Fauci, the American University of Beirut (AUB) graduate spoke to AFP in measured tones.

"I'm only doing what should be expected of all public sector employees," said the gastrointestinal and bariatric surgeon, who has headed the hospital since 2015.

The spotlight should instead be on his team, he argued, and on a rare functioning institution "in a country that lacks them".

The virus struck as Lebanon is mired in its worst economic crisis since the 1975-1990 civil war and authorities appear paralysed by endless political deadlock over ever deteriorating public services.

As power cuts peaked at around 15 hours a day in July and fuel for the hospital's generators started to run out, Abiad was forced to close down two of its six operating theatres and postpone surgeries.

But just one tweet from him was enough to spark a flurry of donations.

In a country long stymied by entrenched sectarianism and cronyism, Abiad has been held up as an example of a public sector employee who puts the interests of others first.

After images circulated online last month of a crowd of people queueing to be tested at the hospital, Abiad swiftly acknowledged the need for better social distancing.

Activist Dona Maallawi, 29, praised Abiad's no-nonsense communication style, saying "he issues near daily updates about the situation, without embellishments but rather with clear knowledge of the details".

The hospital director himself says he finds such praise "annoying" and despairs at such low expectations of the public sector.

In between his duties, Abiad takes to Twitter to dispense advice on how to avoid a worst-case scenario that would overwhelm Lebanese hospitals, correcting any misinformation with tact and diplomacy.

Christophe Martin, head of the International Committee of the Red Cross (ICRC) delegation in Lebanon, said Abiad had become an "influencer".

"He is today one of the very few Lebanese citizens working in the public domain that truly and honestly works for (its) best interests," he said.

"One needs to just read his threads on Twitter to realise how much intelligence, reflection he brings in his overall communication."

Abiad said his move five years ago from the prestigious and well-equipped AUB medical centre to an underfunded state hospital was no easy choice.

But he saw it as his "duty" to take on the running of the ICRC-backed Rafic Hariri hospital, as it was "the main one treating the working class and the poor".

As daily cases hit a new record of 224 on Friday, even after authorities had re-instated a partial lockdown, he urged Lebanese on Twitter to take the spike "very seriously".

"Measures have to be enforced with no exceptions," he warned. "The public has to comply for its own good. If we falter, it will be a very steep fall."

Speaking to AFP, he urged better equipped and more numerous private hospitals to shoulder their share of the burden, despite their fears it might mean even more unpaid bills by the state.

The father of three fears renewed pressure on the health sector during a possible autumn rise in cases -- but remains optimistic about Lebanon pulling through if adequate measures are taken.

Until then, Abiad said, he would take comfort in the solidarity among his staff and the everyday "small wins".