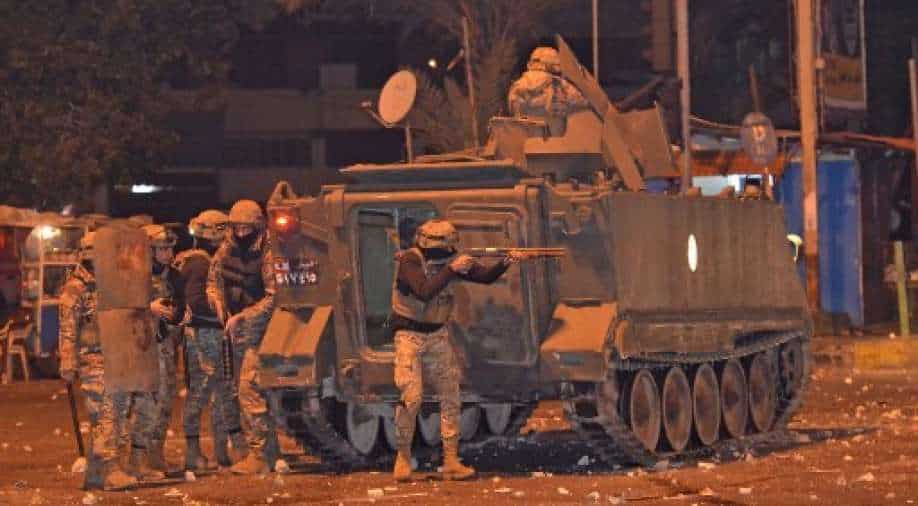 A Lebanese soldier fires rubber bullet at anti-government protesters amid clashes in the northern port city of Tripoli Photograph:( AFP )

The coronavirus cases have spiked in the country after families reportedly gathered during the year-end holidays and authorities allowed bars to stay open until 3:00 am.

Protesters clashed with police in Lebanon's capital Tripoli on Tuesday amid a national coronavirus lockdown leading to the at least 45 people being injured.

The demonstrators came out on the streets as they threw bottles at the police who retaliated with tear gas and rubber bullets. Protesters say the lockdown has led to worsening of their economic conditions.

The government rolled out tanks as protests spread. Last week, authorities had extended the lockdown by another two weeks with round-the-clock curfew in force nationwide.

The coronavirus cases have spiked in the country after  families reportedly gathered during the year-end holidays and authorities allowed bars to stay open until 3:00 am. The surge in cases has put pressure on the country's health services which has been reeling in the economic crisis.

Lebanon has recorded over 285,000 coronavirus cases with over 2,470 fatalities.

The country has been in the midst of an economic turmoil which was exacerbated after the coronavirus pandemic last year.

The blasts in Beirut in August, 2020 in which at least 200 had died had further heightened the economic crisis.

According to reports, half of the country's population lives below the poverty line, with a quarter of the population who live in extreme poverty.