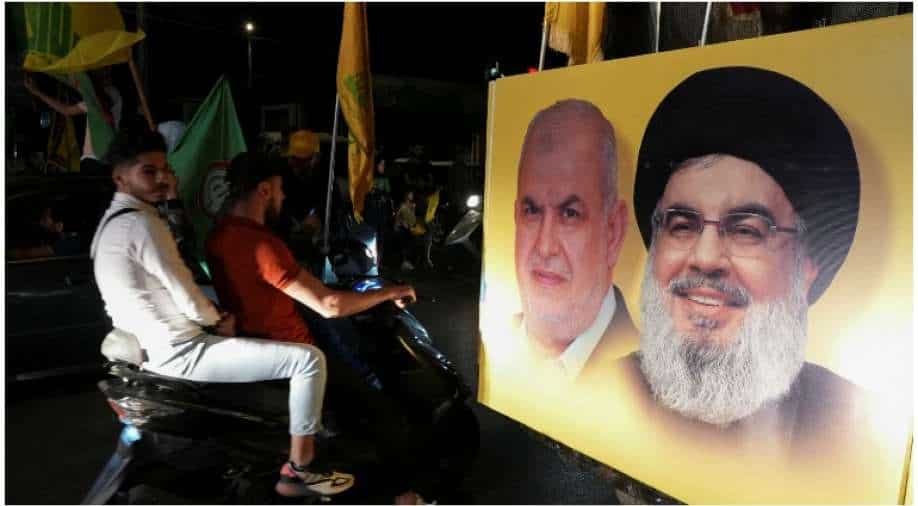 Supporters carry Hezbollah and Amal Movement flags as they ride in a convoy past a poster depicting Hezbollah leader Sayyed Hassan Nasrallah and Head of Hezbollah's parliamentary bloc Mohamed Raad, as votes are being counted in Lebanon's parliamentary election, in Nabatiyeh, southern Lebanon May 15, 2022 Photograph:( Reuters )

Iran-supported Hezbollah and allies might lose majority in Lebanon's parliament, said Reuters quoting sources. The elections took place on Sunday. If true, the prediction of setback to Hezbollah may be a major blow to heavily armed faction.

A political deadlock may be possible with losses to pro-Iran coalition coupled with unexpected victories for newcomer condidates. Such a deadlock may further delay much needed reforms required to address Lebanon's economic crisis

The country's interior ministry announced first batch of official election results on Monday. These elections are first since the huge port explosion in Beirut.

Reuters quoted sources among Hezbollah allies to say that it looked difficult for the alliance to secure more than 64 seats in the parliament. Lebanese parliament has 128 seats.

That marked a notable drop from the 2018 elections, when the alliance won 71 seats, pulling Lebanon deeper into the orbit of Shi'ite Muslim-led Iran and away from Sunni-led Saudi Arabia.

This year's results could counter that influence. Iran on Monday said it respected the vote and had never intervened in Lebanon's internal affairs.

Locally, the results leave parliament fractured into several camps and more sharply polarised between Hezbollah's allies and opponents, who are not currently united into a single bloc.