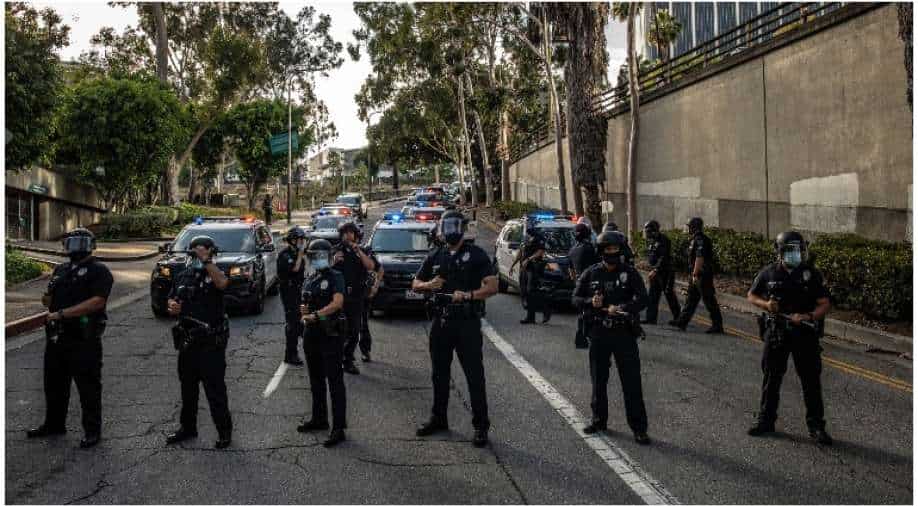 The Los Angeles Police Department severely mishandled protests last summer in the wake of George Floyd’s death, illegally detaining protesters, issuing conflicting orders to its rank-and-file officers and striking people who had committed no crimes with rubber bullets, beanbags and batons, according to a scathing report released Thursday.

An ill-prepared department quickly allowed the situation to spiral out of control when some protesters got violent, failing to rein in much of the most destructive behavior while arresting thousands of protesters for minor offenses, according to the 101-page report commissioned by the City Council.

The report was also highly critical of the department’s leadership, saying that high-ranking officers sometimes made chaotic scenes even worse by shifting strategies without communicating clearly. In many cases, officers used “antiquated tactics” that failed to calm the more violent demonstrators, some of whom the report said deliberately threw things at officers from behind a line of peaceful protesters.

The review is the latest to find serious fault with a police department’s response to the wave of protests that swept the country in the wake of Floyd’s death in Minneapolis on May 25.

From New York to Chicago to Dallas, investigations in the past several months have found that police departments nationwide botched their handling of the protests. In city after city, officers, under faulty supervision, ignored protocols and used excessive force on demonstrators. Mass arrests swept up people who were not breaking any laws. And aggressive responses caused gatherings to quickly descend into chaos.

“The response really was a failure on many levels,” Margaret Garnett, the commissioner for the New York City Department of Investigation, said at the time.

In Chicago, an inspector general’s report found that officers had failed to wear body cameras as required and underreported how many times they used their batons to strike protesters. Dallas police officers were found to have fired pepper balls at peaceful marchers. And in Philadelphia, a report commissioned by the mayor condemned an unprepared police response in which officers fueled unrest in some predominantly Black areas with excessive force against demonstrators, while allowing white men armed with bats and pipes to confront protesters in other parts of town.

In Los Angeles, undercover officers blended into the protests but then had no way to report criminal behavior directly to supervisors. Sometimes they had to be rescued from the devolving crowd, the report said, adding that the department’s intelligence operations have become less effective as positions in that field were cut in favor of patrol units.

And although officers arrested thousands of people during the protests in late May, there was no clear plan for how to detain and process them, according to the report. Some protesters were injured so severely by “less lethal” munitions — like rubber bullets and pepper balls — that they had to have surgery.

The Los Angeles Police Department said in a statement that its chief, Michel Moore, had “taken responsibility for activities over the summer,” and that the department had provided crowd control training to its officers after the summer unrest.

“The opportunity to learn from our mistakes, to grow, and become better servants to our community is something that has been embraced and we look forward to leaning into the challenges and being better,” the statement said.

RJ Dawson, who took part in the protests in Los Angeles as part of an activist group, said he had little hope that the report would lead to significant changes.

“I find that these reports tell us what we already know,” he said. “When you’re out here, you see the civil rights violations.”

The review, one of three investigations into the department’s response to the demonstrations, was completed by a panel of former police commanders and led by Gerald Chaleff, who has served on police oversight panels in Los Angeles dating back to the city’s 1992 riots after four officers were acquitted in the beating of Rodney King.

“There was a lack of preparation, a lack of planning,” Chaleff said of the Los Angeles Police Department in an interview, adding that it “could have minimized” the destruction caused by a small group of people who vandalized the city during last year’s protests.

He said that most demonstrators were peaceful, but that “there were some people there to create chaos and cause problems.”

In interviews, several commanders admitted to the authors of the report that they lacked experience in managing peaceful protests and said they did not receive enough training to maintain order.

Training in crowd control, which became mandatory after the police responded violently in 2007 to demonstrations over immigrant rights, had not occurred for several years leading up to 2020, according to the report. There are “still a few high-level personnel” with expertise in handling large demonstrations, but the report said the Police Department should prioritize the training going forward, as officers retire and are assigned elsewhere.

Officers interviewed for the report said they thought that “good relationships” with residents would keep the demonstrations peaceful, as they had in the recent past, but that their confidence resulted in them failing to plan.

The department formed lines of officers standing shoulder to shoulder to block off a street or keep the protesters from going a certain way. But this technique proved ineffective. As violence erupted, the lines did nothing to help control the crowd.

Across the country, reports have consistently shown similar failures.

In New York, more than 2,000 people were arrested during the city’s first week of demonstrations and enforcement during the height of the protests was overly aggressive and disproportionately affected people of color, according to the highly critical report, which was issued by the state’s attorney general, Letitia James. Her office received more than 1,300 complaints of police misconduct stemming from those first weeks of protest in New York City, she said.

In Portland, Oregon, Justice Department lawyers wrote last month that the city’s police department was out of compliance with a 2014 settlement agreement that focused in part on how officers used force. The Justice Department wrote in court that during protests last year, the Portland Police Bureau used force more than 6,000 times in six months, at times deviating from policy.

In Seattle, the city’s Office of Inspector General has been working on a review of last year’s protests, saying there were more than 120 separate protest events and more than 19,000 complaints about how they were handled.

In Chicago, the city’s inspector general report found that the Police Department’s senior leadership had failed the public and rank-and-file officers in its handling of intense protests. As in Los Angeles, the department failed to properly process mass arrests, the report said, overcharging some people and undercharging others. Officers obscured their badge numbers and name plates, and many did not wear body cameras, making it difficult to hold officers accountable for misconduct.

All this happened as the public’s own footage of questionable tactics by Chicago officers circulated widely, the report said. The city and the Police Department, the report said, may have been set “back significantly in their long-running, deeply challenged effort to foster trust with members of the community.”

The Dallas Police Department also came under close scrutiny for how it handled protests. A Dallas Morning News report found that the police had improperly fired pepper balls at protesters. A federal judge had issued a temporary restraining order preventing officers from using chemical agents, flash-bang grenades and other less-lethal weapons against protesters. The police chief at the time ended up resigning, though she said it was for reasons other than the criticism of the protest response.

Chaleff, who once served as the Los Angeles Police Department’s special assistant for constitutional policing under former Chief William J. Bratton, who later led the New York Police Department, noted that Thursday’s report was primarily concerned with the institutional response, not with any particular incident of police misconduct, a sign that the police had “allowed less violence” than in the past.

“I think there’s been progress,” he said. “But you have to be prepared for what’s coming, and you have to have the elected and appointed leadership that understands what is required and creates a culture for the kinds of responses that are necessary.”